None
Gyanzar (ギャンザー Gyanzā) was a monster pet belonging to Alien Krea Shion that appeared in Ultraman Dyna.

After Alien Krea Shion came to Earth, Gyanzar appeared in a city causing a rampage. However, when Super GUTS tried to capture him in an electric field, Gyanzar seemingly disappeared. Gyanzar returned that night as he was summoned by Shion to destroy Super GUTS's base. After his right hand blew off, Gyanzar spawned a tentacle in its place and took down Shin's fighter, forcing him to turn into Ultraman Dyna. Dyna and Gyanzar battled with the hero having the upper hand and after Alien Krea's saucer was destroyed, the hero used a single shot of the Solgent Beam to destroy his monster. After the battle Dyna used the Water Stream on the forest fire caused by Gyanzar. 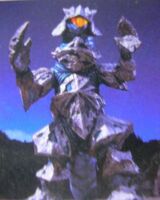 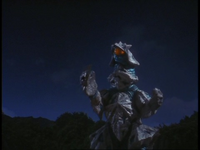 Add a photo to this gallery
Retrieved from "https://ultra.fandom.com/wiki/Gyanzar?oldid=511026"
Community content is available under CC-BY-SA unless otherwise noted.