"I am Gyabish! Please help me!"

―Baby Gyabish crying for help when chased by Alien Dais

Coming to Earth two Baby Gyabishes were hunted down by Alien Dais after his home world and daughter were destroyed by a Perfect Gyabish. After one was destroyed another was found by a little girl at a beach. Dais soon found the small alien and it's keeper, but Super GUTS took them both back to their base. Just as Dais was about to kill Baby Gyabish the small girl tried to protect it, but the fuzzy Kaiju teleported both of them away into an ally where it grew into Intermediate Gyabish as Super GUTS tracked them into an alley. Before a shot could be fired Intermediate Gyabish used it's absorb beam to absorb the small girl and quickly became Adult Gyabish. As it was ravaging the city upon transformation Super GUTS arrived on the scene. Alien Dais quickly saved the small girl within the fuzzy kaiju's head, but died from Gyabish's mouth needles. With great anger Asuka turned into Ultraman Dyna. At first Dyna was easily beating down Gyabish, but after uses of its tail lightning and absorb beam the fuzzy Kaiju soon gained the upper hand. Dyna didn't give up and soon used his Dyna Slash to cut off Gyabish's tail and soon reduced him to mere flames using the Solgent Beam (Spacium Ray type).

Released exclusively as a High Grade-styled "Ultra Monster Complete Works" lineup, all of Gyabish's three forms are produced as PVC figurines for the box set. 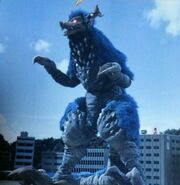 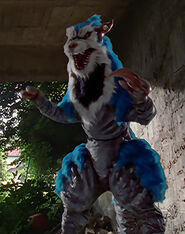 Gyabish in a magazine
Community content is available under CC-BY-SA unless otherwise noted.
Advertisement