None
Guwam (グワーム Guwāmu) is a cyborg dragon that appeared in the TV series, Ultraman Tiga. He appeared in episode 35.

Guwam was a monster who had come to invade Earth as a weapon by Alien Desimo. After being attacked at an air base, both monster and master had been forced into sleeping for 24 years that their current locations, with Guwam asleep in the Kunrun Mountains. After Alien Desimo had found a host in the form of Rena of GUTS, The alien merged with Guwam, awakening the monster and sending it to attack GUTS, who had appeared at the Mountains to investigate. Guwam immediately began releasing its Smoke to make Earth's atmosphere more suitible to its master, all while GUTS was unable to penetrate his armor with their weapons. Shortly after, Ultraman Tiga arrived by teleporting to Guwam's location and stopped GUTS from striking at Guwam's exposed head in fear of them killing Rena. However, taking GUTS's weapons head on wound up weakening Tiga and allowing the Ultra to be pummeled by Guwam. Tiga however would not give up and managed to free Rena from Guwam's control, allowing GUTS to fire their Dexus Beam at the monster's head, destroying both Guwam and Alien Desimo simultaneously.

Miniature figure of Guwam by Bandai 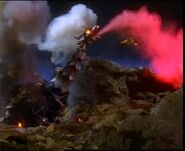 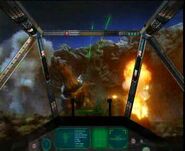