Guwaganda was originally a stag beetle belonging to Atchan, a fourth grade elementary student who gave said pet to fifth grader Yama-chan. Despite Yama-chan's precaution in keeping the beetle in its cage, his insect-hating mother put the pet outside and it died from exposure to cold temperature.

After burying said stag beetle, Atchan's pent up anger generated a pile of Minus Energy that was enough to revive the dead insect into a towering monster, awakening right when Yama-chan was trying to grave-robbing its resting place. Neither of UGM's attacks proven effective and Guwaganda simply targeted its supposed killer. Ultraman 80 interfered and discovered its reasons of attacking. Yama-chan apologizes to Atchan and the two boys reconcile, causing Guwaganda to stop its attack and return to its resting place.

Atchan decided to give his deceased stag beetle to Yama-chan as a specimen, but to the children's surprise, their pet was revived as they formed a team in raising it throughout the winter season. Let's Go! Stag Beetle Wintering Team

In the July 1981 issue of the gravure magazine, Guwaganda paired itself with a revived Zetton to fight against Andro Melos, going as far as to combine into Combined Zetton. Their fusion was quickly destroyed by Cosmo Aura. 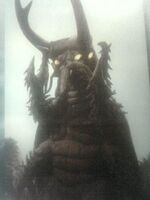 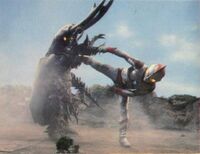 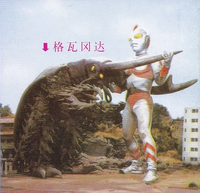