Brilliant! He is using the monster's stupidity in order to destroy the shards.Garm as he witness Barel's strategy.

Guts Gunner・Garm (ガッツガンナー・ガルム Gattsu Ganna Gam) is a supporting character of the video game miniseries Mega Monster Rush Ultra Frontier. He is the strategist and range attacker of the Rush Hunters.

Alien Mefilas Djent, sent the Rush Hunters alien team, Baltan Battler・Barel, Guts Gunner Garm and the rookie Magma Master Magna to hunt the Kaiju as sport. Garm first used the landmines bought from a Kanegon to bury the beast but failed. He later uses his cross-shaped laser cannon to topple down a stalagmite to stop it. Later Magna uses this as an opening to strike Red King but failed. Red King chased them as Barel splits into three in order to evade the monster's boulder and later use his Shurikens to strike the Plasma shards on his back. However, it was still not enough. He uses the monster's stupidity by baiting himself in order for Red King to chase him as he bashes through some stalagmites, destroying all shards on his back. But a single Plasma Soul shard appeared in his mouth. Magna uses this as an opportunity to engage the Force Sabre attack but before he can take the action, Garm already snipped the Plasma Soul shard in his mouth. Later, he and his teammates hunt Neronga by using Magna as a lightning rod to prevent the monster from feeding lightning again and Garm snipped the whole Plasma Soul shards from him. After the adventures they had, they went back to Hunter Station.

After he and his friends' another successful hunt on Eleking, Djent reflashes back on their hunt against Antlar where the team found themselves in a difficulty to destroy him. As Magna being the only one left unharmed, he decided to take on Antlar himself but before he can charge, the Dada Team hunters arrived to destroy Antlar.

While hunting Dinosaur Tank Mk.II, Garm and his team realized they were the last one standing. After Magna baited the monster to his team, Barel trapped the monster by creating illusions of himself, giving the rest of them to attack all of his Plasma Shards but as one shard remained, Barel attacked it, causing Dinosaur Tank to lose control, fall in a cliff and exploded.

During the Rush Hunter's hunt on Verokron, the monsters easily overpowered them with an endless barrage of warheads. When one of the missiles about to hit Magna, suddenly his armor shines and he unintentionally threw the missile in front of him to Verokron. Magna is surprised of his new power and his teammates tried to hold off Verokron's missile while Magna reactivated his inner power again as he jumped and backfired one of Verokron's missiles back to the monster's mouth, successfully killing him in one blow. Their victory was celebrated by spectators at the Hunters Station with Djent congratulated them. However, the ceremony stopped halfway with the awakening of Plasma Killersaurus, a legendary Plasma monster.

Magna and his teammates later sent to kill Super Earth Gomora. With the combined strategic of sleeping gas traps and their attacks, they managed to win but they found out that their points had been stolen by Jailbreak Hunters, a group of illegitimate hunter teams that gain points by stealing from another team. As they about to battle, Alien Mefilas Sickle appeared and apprehended them by imprisoning them in cards, though he did give back their points.

After flashing back to their last hunt and their encounter with the Jailbreak Hunters and Mefilas Sickle, they witnessed Gandar rising out of the snow on a cliff on a snowy planet, but before they could get started, Chibuloader Strong rose out of the snow and struck the shards on Gandar's left shoulder with his Breaker Strong before he was struck by Gandar's Cold Blow. Battler and Magna then distracted Gandar before Garm fired his Gatling Gun at Gandar's torso before Gandar disappeared into the snow again. The monster then reappeared and fired his Cold Blow at Magna, who after dodging it, launched his Lightning Claw with Battler's Lightning Boomerang at the monster but it dodged their attacks yet again but hiding in the snow. Gandar reappeared behind Garm and fired his Cold Blow at him but Battler saved him before Gandar can land a hit on him. As the three went to higher ground to discuss a new strategy, Chibuloader contacted them and offered an alliance with them. Later, Garm managed to find Chibuloader's exosuit and planted a self-destruct mechanism inside while Magna and Battler went off to keep Gandar distracted by drawing it's fire and launching boomerangs at him. Just as Gandar was about to catch Magna, Garm launched Chibuloader's Exosuit and when it reached Gandar, it self-destructed and left Gandar in a dirt hole where he can't hide. The three destroyed the Plasma Shards on his shoulders with Garm's Gatling Gun, Battler's Cyclone Saucer, and finally with Magna's Lightning Claw. It tried to fly away, but the loss of his Plasma Shards left him too tired and soon he collapsed. 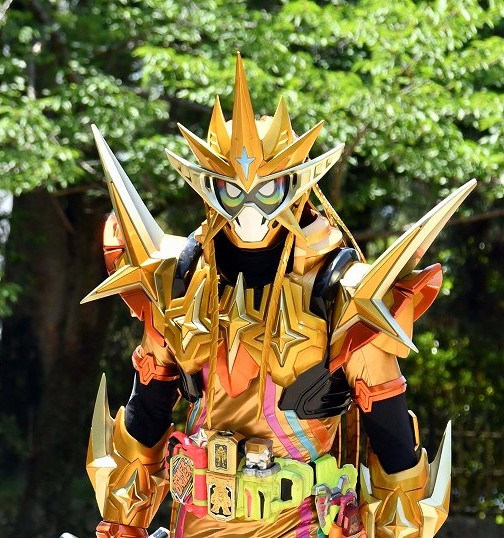