None
Guron (グロン, Guron) is a Kaiju that appeared in episode 32 of Ultraman Taro.

After another day of school has passed, a few kids from a weather observing class decided to look out through the telescope and one of those kids, named Kenichi, noticed a big cloud that looked like a monster and then a black cloud forming and noticed a sleepy daydreamer kid named Adon who transferred to the kids' school last month. The kids decided to befriend him and showed him what they saw on the telescope and when Kenichi took another look, he literally saw the monster Guron's eye and got frightened, with the others falling behind. The monster then summoned his winds to drive the kids away and moved down south from the northeast.

After walking back from school and experiencing Adon's powers, Kenichi realized that he was the one who summoned the monster Guron and they watched from a safe distance as the monster used his wind powers to bring chaos and destruction to a nearby city with the ZAT not too far behind.

Unlike most monsters, Guron pretended to be frightened by the attacks from the attack vehicles and laid on the ground defeated, or so it's enemies thought. Guron turned itself into a shadow and then reverted back to it's monster form and the two children rode on it's head, making it hard for the attack team to attack the monster without hurting the children. Refusing to let all of Japan be destroyed by Guron's wind powers, Kenichi grabbed a drafting triangle from his backpack and stabbed at the monster's head, along with Adon's umbrella (after much persuasion is needed), to draw blood, but Guron used a tower to try to get the kids off of his head. It was then revealed that Adon was not the one who summoned the monster in the first place.

Kotaro then came up with an idea to use the Sky Condor as a cork to block the monster's mouth and fire a missile inside of it to attack the throat so that it won't fire any more wind attacks. The plan went underway but the plan ended up failing, and with the monster still kicking, Kotaro decided to transform into Ultraman Taro to save the two kids, who escaped from the monster, and began to attack Guron.

Even though the monster had the edge by using it's wind to distract Taro so that he can beat him in close combat, Taro managed to even the odds against him. Guron also grabbed some telephone poles and launched them against the Ultra, but he dodged them all and waited for the monster to suck in a large amount of air so that it can launch his King Bracelet at it to use as a muzzle, preventing him from launching it from using any more wind attacks against him. Guron then sucked up more air, but forgot about the bracelet blocking his mouth, resulting in him rapidly expanding until he became inflated like a balloon and exploded soon afterwards. 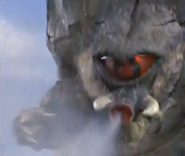 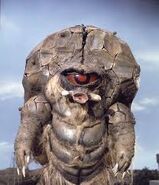 Figure of Guron, by Marmit.

Another figure of Guron, by Buta no Hana. 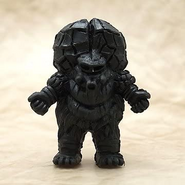 A Guron eraser
Community content is available under CC-BY-SA unless otherwise noted.
Advertisement