Gukulu (グクル Gukuru) means "heart" in Okinawan dialect, with the Shisa (シーサー Shīsā), in both its name and design, being a direct reference to the Okinawan mythological being, the Shisa.

Gukulushisa were a kind of divine beast that watched over life-bearing planets. There used to be more of their kind, but as civilizations advanced and nature was destroyed, they vanished and were forgotten to time. That was until Queen Izana found a lone member wandering the universe, and invited it to join her in the Galaxy Rescue Force. Initiation

After the two's heroic efforts, Ultraman Taro dispatched Ultraman Ribut and Sora to a position in the Galaxy Rescue Force. Gukulushisa along with Queen Izana and Andro Melos, welcomed the two newcomers of the group. Ultra Galaxy Fight: The Absolute Conspiracy

At some point, Gukulushisa was sent to Geed's Earth in ancient times, tasked with being the keeper of Red Steel at the back of the Okinawa forest. Its motive was to protect nature and all living creatures there. While there, it encountered the alien refugee Airu Higa, who would later come to keep the creature within her pendant. In present times, it was summoned to confront the Galactron army that attacked the Okinawa in search of the Red Steel. While it fought well in both of its encounters with the MK-2 Galactron, it was overpowered both times. Its whereabouts as of present are unknown, but it may still reside in Airu's pendant left behind after her death. 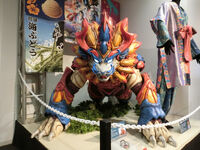