None
Guiro (ギロ Giro), also called Starbem Guiro (ギロ星獣 Giro Seiju)[1], was an alien that appeared in the TV series Ultraman Leo. He appeared in episode 9.

Coming to Earth without the intention of an invader, Guiro hid himself in the Monster Park, a section of an amusement park where monsters defeated by previous Ultras were the theme for attractions. One day, he met Toru and hypnotized the boy to give him an ice cream. While Gen and his friends happily watched the monster attractions, he detected that Guiro as an alien, since he was seen eating an ice cream compared to other costume monsters and Gen's Ultra senses. Guiro and Toru ran away from Gen, but he successfully tailed them with a truck. Guiro shot foam from his antennae and grew to his full size in a fit of rage. With Toru holding on to Guiro's scales, Gen transformed into Leo and fought him. Despite both Leo and Guiro's strength being matched, the alien made his escape.

Later, MAC crews arrived at the amusement park, where Guiro and a hypnotized Toru played in a Carousel. Despite MAC aiming for Guiro, however, the alien escaped to his own realm. Toru was sent to a hospital for treatment but the alien appeared to play with him again, and took him to his realm. While Dan was busy training Gen, they were alerted that Toru had disappeared from his ward. At night, Guiro, in his giant form, was detected in a city and MAC was sent to attack him, unaware that Toru was stuck among Guiro's scales again. After Gen finished his training, he transformed into Leo and attacked Guiro. However, Toru ordered him to stop, not wanting his new friend to die. Guiro later fired his sticky foam to Leo but the Ultra spun himself in the midair to escape from it. With firepower from MAC's fighter jets to distract the alien, Leo kicked Guiro on the back, freeing Toru from his scales and cough the boy just in time to put him down safety.

The battle between Leo and Guiro then continued, as the duo proceeded to duel across the amusement park. In the battle's climactic moment, Leo severed Guiro's antennae during a forward flip, instantly killing the alien, whose giant form dissolved away to leave his body lying lifeless on the floor. Mourning Guiro, Toru exclaimed in anger and sorrow about what had happened, as the alien's reign of terror was only out of his fright for humans. Deciding to set things right, Gen quickly stepped back from the crowd to transform into Leo out of MAC's sight, then restored Guiro's antennae, bringing him back to life. Bidding everyone farewell, Guiro then set off for outer space to begin the journey back to his home planet.

Figure of Guiro, by Marmit. 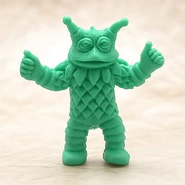 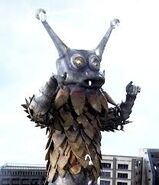 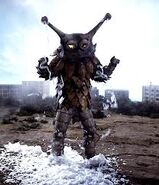 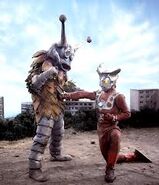 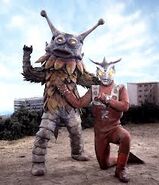 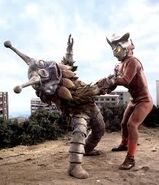