Guigass (ギガス Gigasu)[1] is an ape-like Kaiju that was one of the three monsters awakened by the comet Tsuifon, alongside Dorako and Red King II. It was later destroyed by the SSSP, leaving Ultraman to deal with Red King II.

Guigass' name is inspired by "Gigas," a term for giants in Greek Mythology.

Guigass was a monster awoken from the effects of the comet Tsuifon as it passed the Earth. It awoke in the Arabis Mountains, emitting radio waves that could potentially detonate six missing nuclear bombs. Once the comet passed, the Science Patrol started a full search for the missing weapons and soon crossed paths with Guigass. As the team retreated, the monster Dorako flew in. They managed to lure Dorako to Guigass where the pair quickly engaged in combat.

As the titans waged war, a third contender burst forth from the rocks: Red King (who had swallowed the nuclear bombs). Red King challenged both Guigass and Dorako. The pair were no match for the deadly monster and Guigass was sent into full retreat, but the Science Patrol couldn't allow such a dangerous beast to exist. As Guigass crawled away, they unleashed their Extreme Drought Bomb, a bomb that destroys any signs of water on the object it touches, putting a sudden end to its life while Ultraman dealt with Red King. Mystery Comet Tsuifon

Guigass suddenly appeared near an important observatory at the Izuhara Highlands. Haruki Natsukawa was sent to deal with it by piloting Sevenger. After a short brawl, Haruki unleashed Sevenger's newest weapon, the Rigid Core Iron Fist Rocket, to defeat Guigass, but had also crashed it into the observatory despite Captain Shota Hebikura telling him to be careful. After the battle, Director Kuriyama scolded the two of them again, saying that it is because of incidents like these that Windom's development could not be funded. Live Coverage! The Monster Transport Operation 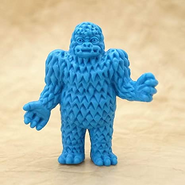 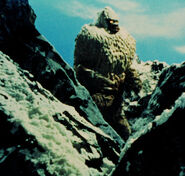 Guigass as he appears in an Ultraman Orb stage show