Normal:
King:
Guesra (ゲスラ Gesura)[1] is an amphibious Kaiju that attacked several seaports in search of cacao beans. It was defeated by Ultraman before it could finish its second raid. It debuted in episode 6 of the series.

Guesra was a Brazilian lizard species whose purpose is to scare of pests from interrupting cacao beans. One Guesra egg accidentally carried along into a delivery cacao ship to Japan. As Guesra hatched, it falls into Tokyo sea waters, which at that time was polluted, and mutated it into a giant monster. Guesra was first sighted by several sailors, not knowing it as a threat until the creature grew bigger over time.

Guesra started to attack several shipment supply of cacao beans until the SSSP lured it away from the shipment. However, it instead turned over its attention to a cacao warehouse where Hoshino and his friends were trying to fend themselves from Diamond Kick, a group of jewel smugglers. As the monster is about to attack the SSSP and Hoshino's friends in a police patrol car, Hayata then appeared, and transformed into Ultraman. Guesra attacked first, but Ultraman quickly gained the upper hand, tossing the monster every which way, eventually they both end up in the water. Ultraman then ripped off Guesra's fin. Injured, the monster returned to the ocean, and dying shortly afterwards. The Coast Guard Command

King Guesra (キングゲスラ Kingu Gesura) was the first monster sent by Super Alien Hipporit to attack humanity by attacking a harbor. However before King Guesra could harm anyone, Ultraman Mebius appeared to fight it. While quickly gaining the upper hand, Mebius was soon shocked by Guesra's powerful electric surge. As it began to beat him down, Daigo remembered how Ultraman killed the original Guesra, and yelled out that its fin was the weakness. Mebius heard and ripped the dorsal fin off King Guesra, leaving the beast powerless, as moments later it was reduced to ashes by the Mebium Shoot. After King Pandon, King Silvergon, King Goldras, and Super Alien Hipporit were killed, all the monsters souls combined into Giga Khimaira. Great Decisive Battle! The Super 8 Ultra Brothers

King Guesra reappeared in the movie Mega Monster Battle: Ultra Galaxy Legends The Movie as one of Ultraman Belial's 100 Monster Army. He was first seen as one of the spirits awakening to the Plasma Spark in a shot of the Monster Graveyard along with Telesdon, Sadola, Zetton, Angross, and Jasyuline. He then rose out of the ground along with Eleking, Hoe, Tyrant, Red King, Banpira, and Gudon before being re-captured by Ultraman Belial. He then teamed up with Arigera, Gudon, Twin Tail, Magular, Antlar, Gomess, Alien Baltan, Zetton, King Silvergon, and King Goldras to take on Ultraman. He attacked Ultraman first, but was grabbed and slammed to the ground. His fate is unknown, but this likely killed him, as he is not seen again after this.

King Guesra appeared in Ultraman X as an affected victim of the Dark Thunder Energy. As soon as he was struck with it, he rises from the ground in Tatara City and proceeded to go on a rampage, as the whole thing was sensed by Pigmon. After getting distracted by Pigmon's balloon it was about to attack Asuna and Pigmon until Daichi transformed into Ultraman X to deal with the giant fish monster. X had the upper hand at first until Guesra launched his new abilities at him and not even his Cyber Bemstar Armor could handle the attacks. Xio tried to attack his dorsal fin, his considered weakness but, the Dark Thunder Energy made it tougher as well. It would seem that Guesra would win this fight until X powered up to his Exceed X form and once again had the edge in his favor. After blocking Guesra's energy scales, X used his Exceed X Slash to relieve him of the Dark Thunder Energy and then used his Xanadium Beam on him, turning him into a Spark Doll. My Friend's a Monster

In the final episode of Ultraman X, after Greeza destroyed the Xio base, King Guesra's Spark Doll was absorbed by Greeza. After speaking out to Gomora and striking Greeza right in the center of his chest, King Guesra, along with all of the other Spark Dolls, traveled to X and united with him. Cyber King Guesra's power was used to help form the Hybrid Armor and power up the Ultimate Xanadium to defeat Greeza once and for all. King Guesra, along with the numerous other Cyber Cards and Spark Dolls, then appeared and thanked Daichi as he thanked them. The Rainbow Land

King Guesra reappeared in episode six of the series Ultraman Orb as a Kaiju Card used by Jugglus Juggler in a card game with Alien Nackle Nagus and Alien Metron Tarude.

King Guesra returned in episode 1 of this web series. In this series King Guesra is one of the victims of the Bezelbs. When Shinra visited Psychi, the doctor showed the power of the Kugutsu. King Guesra was on Planet Zain next to Arstron and they were both infected with Kugutsu. They receive the order to fight and after a short battle Arstron is victorious as it kills King Guesra.

12 years prior to the series, a Guesra infant named Chibisuke (チビスケ, Chibisuke) belonged to the young Hiroyuki Kudo, who fed it chocolate. One day, a Lecuum suddenly took Chibisuke and went back to its ship, but Hiroyuki tried his best to stop him. Hiroyuki almost died after failing to save his pet, but was fortunately saved by the light of Ultraman Taiga.

The kidnapped Chibisuke had a control chip planted into its brain and was modified into a King Guesra by the Villain Guild. It was first sighted at a seaport, having been summoned by a Lecuum and his accomplices as a showcase for a monster auction, which prompted EGIS members Hiroyuki and Homare Soya to investigate after being contracted by Inspector Sakura. The Rekyum activated the control chip in its brain, causing King Guesra to go berserk before it escaped once again. Upon further inspection, Pirika Asahikawa discovers that the monster had attacked a cacao storage, giving Hiroyuki further suspicion that the Guesra is his old pet Chibisuke.

King Guesra was summoned again near another chocolate storage facility, but Hiroyuki managed to calm it down, confirming to him that the monster was indeed Chibisuke, which caused most of the bidders of the monster auction to withdraw their money. However, Kirisaki appeared and caused it go on another rampage. With no other choice left, Hiroyuki transformed into Ultraman Taiga. A brief battle took place, but Hiroyuki stopped and managed to calm Chibisuke down again. Their reunion was interrupted by Ultraman Tregear, who fought against Taiga and easily trounced him. Seeing Hiroyuki/Taiga get hurt, Chibisuke fought Tregear as well, but could not even land a hit on him. Tregear then used his Trera Ardiga, firing at Taiga but Chibisuke stepped in the way to protect him. Chibisuke was destroyed in an explosion, which greatly angered both Taiga and Hiroyuki. Tregear

Guesra is one of the hibernating monsters awakened when Genegarg crashed on Earth. He is located in Brazil. A Warrior's Principle

Sent by the Earth itself,The Game to Extinction King Guesra emerged from the sea alongside Takkong. The two monsters made their way inland to attempt to eliminate Ultroid Zero from activating. Both monsters were then confronted by Ultraman Z, who gained the upper hand only to lose it when the battle shifted into the sea. After the duo knocked Z out momentarily, they tried to join with Demaaga, Gomess, and Pagos who were brawling with the newest Anti-Kaiju Robot until Z interfered again. After Z used two signature moves with the help of the Beliarok, Guesra and Takkong marched their way back to the ocean, calm once more, and escaping the fate of their would be team mates. Prelude to a Nightmare 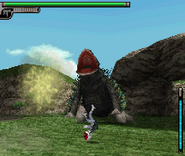 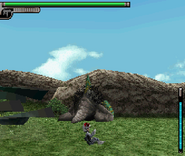 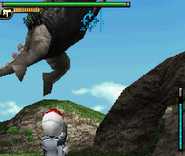 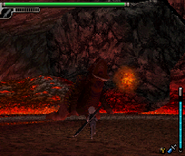 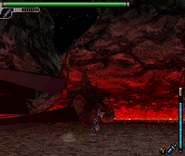 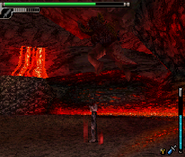 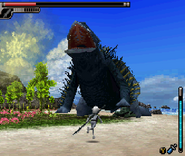 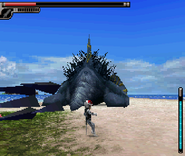 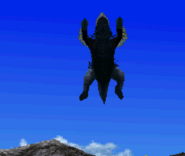 In Ultraman X Guesra's Spark Doll was hit by Dark Thunder Energy and caused it to rampage. It was reverted back into a Spark Doll after Ultraman X defeated it.

Guesra was one of the many Kaiju to appear in this game. Two subspecies of this Kaiju appeared named Guesra Type Red and Guesra Type Blue. Type Red lived in a volcanic environment as opposed to water.

King Guesra reappears in episode 3 of the series, in a segment called "Monster Massage". In this segment, Guesra was unwell, and needed a massage to feel better.

King Guesra appears in the second volume of the Redman comic, alongside fellow aquatic kaiju, Gubila. During their fight, King Guesra and Gubila combine into Gesubira. 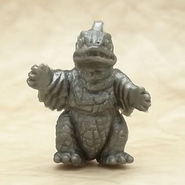