"Your kind will learn to live with me, or perish."

―Gudis to Jack when Ultraman Great is inside Gudis's body

Jack Shindo and Stanley Haggard are the first men to land on Mars. Upon arriving they are met with none other than the strange alien monster Gudis. As Gudis was slowly moving towards them a giant silver humanoid by the name of Ultraman Great came to the rescue. After Gudis pushed Great aside he killed Stanley as he tried to escape in the ship as Jack was trapped by a rock slide. Great quickly got back up and used Burning Plasma to knock Gudis down. Gudis fell dead by the Burning Plasma's true power, but not before he sent a virus to Earth. To save the humans of Earth, Great chose Jack as his human host and went to Earth.

Super Gudis (スーパーゴーデス Suupa Godesu) is a transformed and empowered version of Gudis that appeared in episode 6.

One day in the Australian outback, strange volcanic disturbances were discovered that made flying very difficult. As UMA tried to destroy the volcano, Super Gudis was being created in the constantly changing chemical structure in the lava. After the Australian Air Force only sped up the hatching process, Super Gudis emerged from the volcano and Jack turned into Ultraman Great. Great used a barrage of Finger Beams on Super Gudis, but it seemed to have little effect on the Martian super organism. After being unphased by the Burning Plasma, Great was encased in an energy bubble and absorbed into Super Gudis's body. Jack managed to distract Super Gudis by telling it how futile its mission was; eventually, there would be nothing left for it to infect and destroy. This gave Great the opportunity to blow Super Gudis up from the inside out, eliminating the monster's threat once and for all.

While not physically appearing, Gudis Cells were obtained by Absolute Tartarus during his travels through time, and utilized by an Alien Sran who had been recruited by the Absolutian. He attempted to provide Maga-Orochi with a food source by infecting Ultraman Max with the virus, turning him into a monster. Although Ultraman Ribut was able to cure Max in time, leftover Gudis Cells are used to empower Maga-Orochi, forcing the two Ultras and Ultraman Xenon to fight and destroy the monster. The Beginning

For a huge portion of Ultraman: Towards the Future, Gudis spread its cells into various life forms and mutate them into monsters.

Bogun (infected from a tadpole)

Gerukadon (infected from dinosaur fossil and Gus (a lizard)

Jimmy (infected and used to create a clone under Gudis' control) 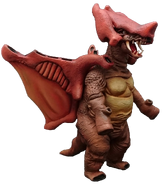 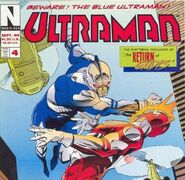 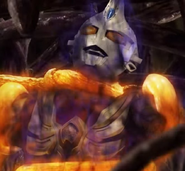 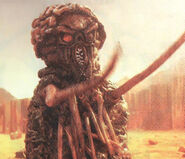 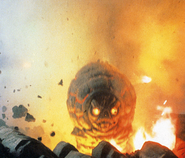 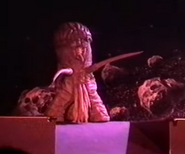 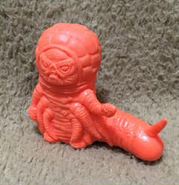