Gubila (グビラ Gubira)[1][2] is an aquatic Kaiju that first appeared in Ultraman. Since then, numerous other Gubilas have been encountered by various Ultras.

Within the depths of the pacific ocean, a strange new beast crawled forth. A fish-like monstrosity, it began a relentless assault on a newly constructed underwater science facility. Its attacks trapped several people within the base, including members of the Science Patrol. As the others tried to rescue them, it became clear their weapons could do little. With oxygen running low within the complex and the threat of decompression and flooding growing, Shin Hayata transformed into Ultraman. The drill-tipped monster began to tunnel into the ground and emerged inland with Ultraman following close behind.

As the two battled, the red and silver giant unleashed his Ultra Slash. The circular disk of jagged energy looped around Gubila's drill and, with a quick move, it was launched back at the hero. Surprised, Ultraman had to react quickly as the creature lunged at him. With a quick chop, the giant broke off the beast’s drill. In pain, Gubila was helpless as Ultraman fired his Spacium Beam, obliterating the sea monster and allowing the hero to rescue those trapped inside the undersea base. The Undersea Science Center

Gubila (as well as Arstron and Gomess (S)) is one of the monsters who has been revived by Alien Bat to serve him. Gubila first appears in the middle of a desolate city, sent by Alien Bat to rampage with only Taiga of Super GUTS to stop him. After attacking and chasing after Taiga and a young boy, Ultraman Cosmos soon appears and battles with Gubila until he is able to use the Luna Extract, turning Gubila good. Freed from Alien Bat's control, Gubila then left the city.

Later in the film, Gubila returns having been brainwashed by Alien Bat again and joins Gomess (S) in double teaming Ultraman Cosmos. Shortly into the fight, Ultraman Zero (whom was only 5 meters tall) evens the odds by battling Gomess (S), allowing Ultraman Cosmos to battle Gubila on his own and ultimately, Cosmos manages to calm down Gubila with the Luna Extract, again turning the monster good. Shockingly, Gubila was tragically murdered by Alien Bat for his failure.

While the Xio lab members Rui and Mamoru were explaining the Dark Thunder Energy for an interview, the thing they were talking about suddenly strikes the ground and summons Gubila as one of its victims, going on a rampage in Area T-3B. The Xio team tried to shoot it down, but none of their weapons proved effective against the monster, not even the Ultlaser couldn't even dent it. While Rui was complimenting about Gubila on the camera, it gave Daichi the cover he needed to transform into Ultraman X and he soon transformed into his Exceed form, after a quick tussle with Gubila in his normal form, and purposely dodged his drill to avoid damage. After X carried Gubila and placed on top of a building on his side, he summoned his Xlugger, used Exceed X Slash to rid Gubila of the Dark Thunder Energy and turned him into a Spark Doll with his Xanadium Beam. Feature Report! 24 Hours Inside Xio

In the final episode of Ultraman X, after Greeza destroyed the Xio base, Gubila's Spark Doll was absorbed by Greeza. After speaking out to Gomora and striking Greeza right in the center of his chest, Gubila, along with all of the other Spark Dolls, traveled to X and united with him. Gubila's power was used to help form the Hybrid Armor and power up the Ultimate Xanadium to defeat Greeza once and for all. Gubila, along with the numerous other Cyber Cards and Spark Dolls, then appeared and thanked Daichi as he thanked them. The Rainbow Land

Gubila reappears in episode 8 of Ultraman Orb where he ate up the supply of fish in the local sea, which resulting in a parent and child Ragon breaching the surface for food. Still hungry, Gubila decided to leave the ocean from the coastline to attack fish markets in Japan and eat their fish in the process, with his movements causing earthquakes to occur and spouts of water to erupt from the sewers.

When the SSP, the fishmonger Mr. Minamoto, and the two Ragon noticed an earthquake after they all got acquainted with each other, Gai warned them about the earthquake happening outside and they saw the monster Gubila burrow up from underground and started to attack the fish market. When the young Ragon was getting his prized toy boat from the storage warehouse, he noticed Gubila using his drill to bore his way inside the warehouse and then the child found himself on the monster's drill. When Gubila noticed this, seeing as how the monster was fish-like, he tossed him into the air and then ate him, much to the despair of his parent and the fish market owner.

But then, Gai transformed into Ultraman Orb Hurricane Slash and gave him a punch so hard, he forced the monster to release the Ragon child via water spray. After he caught the child and returned him to his parent, Orb fought Gubila and he, at first, had the upper hand due to his speed. However, the monster tried to use his drill to attack the Ultra, but Orb kept dodging them point-blank and then summoned his Orb Slugger Lance to hold the monster at bay.

Afterwards, Orb transformed into his Spacium Zeperion form and taunted Gubila to come closer. When he did, the Ultra stopped him in his tracks by using his Shutdown Protect technique to trap him an a bubble and proceeded to send him back to the sea where he came from. The Urban Merman

In episode 24, he is seen carrying the Ragon Family on his back, fleeing Japan's waters to safer areas. The Giga Lord Monster Strikes Back

This Gubila possessed a Little Star. The Little Star's power caused cases of paralysis out in the seas on sailors and fishermen. He was later chased inland by Kei as Pedanium Zetton, and he would partially rise up once in a while and shoot out his paralyzing spray.

Eventually he completely surfaced and was attacked by Pedanium Zetton, Riku immediately transformed into Ultraman Geed and protected the endangered monster. After a few blows from Geed's Royal Megamaster form, Pedanium Zetton used its teleportation abilities to confuse Geed. Just when the fight was looking bad for Geed, Gubila suddenly burrowed behind Pedanium Zetton and sprayed it with his paralyzing spray. This allowed Geed to use the Vertical Spark to defeat Pedanium Zetton once again. After "saying" their farewells and giving Geed his Little Star, Gubila burrowed back underground.

Later on, it was confirmed on the radio that Gubila had returned to the sea.

Being summoned by Makoto Aizen, Gubila appeared in the city while Minato family reminisce over some old things, cutting short their time together.

Ultramen Rosso and Blu transformed and prepared to fight but when Blu blasts his water jet at it, Gubila drinks the water and ejected it from its spout, making a rainbow in the sky. Rosso tried a fire bomb, but Gubila caught it with its drill and flung it upwards, making fireworks. Suddenly, Gubila is electrocuted and smoke came out of its spout as it shrunk down to the size of Rosso's foot. It eventually disappears and reverts into its R/B Crystal as a result of Makoto's AZ Gyro malfunctioning. What happened to its R/B Crystal is never shown afterwards as there is no implication of the brothers or Makoto/D.R.L.N. collecting it.

Oka-Gubila emerged soon after Ignis stole a signal-emitting relic from Ultra-Ancient ruins, chasing down the signal. Himari Nanase used the GUTS Falcon's harpoon to pull Oka-Gubila out of the ground, sending Ignis flying off of its back. Kengo Manaka transformed into Ultraman Trigger to fight against Oka-Gubila but was having trouble keeping up with the monster's burrowing ability and nasal drill. Akito Hijiri then picked up the relic and led Oka-Gubila away, allowing Trigger to change into Power Type. After a brief fight, Trigger used the Circle Arms to finish off Oka-Gubila with the Deracium Claw Impact. For Smiles 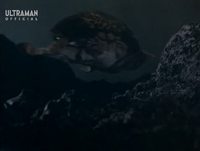 Shocking Blow
Oka-Gubila
Oka-Gubila (オカグビラ Oka Gubira) is a variant of Gubila that has adapted to living underground instead of underwater. The dark spots on its back now have a rocky texture, and go up to the forehead.

Gubila appears in the Redman comic along side King Guesra to battle along side each other against the titular hero. The two fuse at one point becoming Gesubira.