Ultraman Tiga episode 44 "The One Who Inherits the Shadows"

Long ago, Guardie was the companion of an Ultra who would later become known as Evil Tiga. Much like the rest of the Giants of Light, would find himself solidified in stone with his friend for centuries. In the present day when Keigo Masaki merged himself with Guardie's ally's statue, transforming him into Evil Tiga, Guardie had found himself a host in the form of a nearby dog, who was injured during the scuffle between Daigo and Masaki. Taking the dog's body as a host, Guardie came to life and returned to the surface to confront his tainted companion.

Guardie pleaded for his friend and master to stop his destruction, and was visibly reduced to tears, but Masaki's control over Evil Tiga was too much and the Evil Ultra viciously attacked his enemy. Guardie continued to try and gain some control of his old ally while trying to fend off his attacks, but it was all in vain. Eventually, Ultraman Tiga would also return to the surface after having been weakened by Evil Tiga as well, but he was too late in saving Guardie as Evil Tiga blasted his former companion, killing Guardie in cold blood. After a brutal battle between the Tigas, with Ultraman Tiga emerging victorious, the kindly Ultra took Guardie's body into space to honor the last of his kind. Later Guardie's injured host runs past Daigo and the GUTS team, indicating that it might have not been killed. 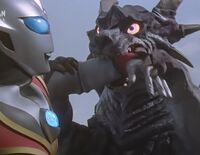 Fangs
Add a photo to this gallery 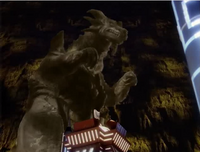 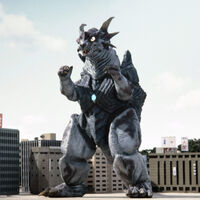 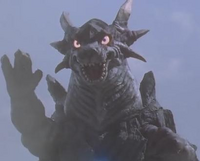 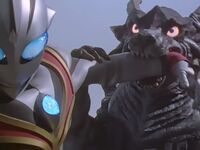 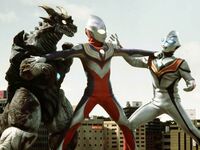 Retrieved from "https://ultra.fandom.com/wiki/Guardie?oldid=511007"
Community content is available under CC-BY-SA unless otherwise noted.