"We are Guar Spectre! Time to avenge the conflict that inflicts on us siblings and led to a rise of a new Guar army."

―Mold and Gina talks as Guar during his awakening.

Ultraman X episode 14 "The Shining Sky, and the Land Beneath It"

Unknown
Guar (グア Gua) was the combined form of the main villains of Andro Melos.

Guar was the combined form of three evil Space Emperor siblings, Juda, Gina, and Mold out of their grudges against the Andro Warriors for foiling their plans. In addition, according to Andro Melos' speculations, Guar is technically a being that decided to split itself into said three siblings. With all of the Guar Army members killed, the three siblings decided to form into this figure. Due to Guar's body being that of a collected form of amoeba, normal attacks and firepowers seemed ineffective until Melos came in with the Grantechtor and used it to destroy the siblings, ending their reign but at the cost of the armor's destruction.

After Mold Spectre was having trouble dealing Xio's defenses, Gina Spectre advised Mold to combine her soul with her Juda's, along with his own, and despite his caution that the fusion would be irreversible, they did so anyway and Guar was recreated again as Guar Spectre (グア・スペクター Gua Supekutā), using Mold Spectre's body as basis and used their new powers to break down the barrier so that they can revive the Spark Dolls own by XIO to create a new Guar Army.

After X distracted Guar with his newly debuted Exceed Illusion, Ginga Victory used the Photon Edge and Solgent Beam, destroying the fusion's weapons. X then used his Exceed X Slash to vanquish the Dark Thunder Energy from Guar's body and prevented them from reviving again. Guar Spectre was defeated once and for all with a combination of X's Xlugger Shot and Ginga Victory's Zepellion Ray.

Dark Energy Slash
Add a photo to this gallery 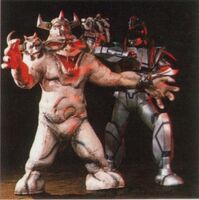 Guar vs X, Ginga and Victory

Guar been cleansed with the Xlugger 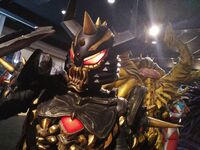 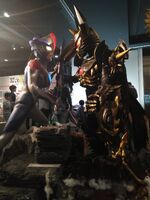 Retrieved from "https://ultra.fandom.com/wiki/Guar?oldid=511005"
Community content is available under CC-BY-SA unless otherwise noted.