A small army served under the Gua Army, they were summoned by the Gua siblings or Fighting Bems during the battle against the Andro Teams. This small army was disbanded following the Gua Army's defunct. 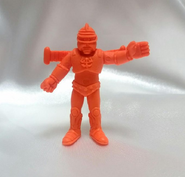