None
Gruanfan (グラルファン Gurarufan) is an ancient mystical beast in the Ultraman Cosmos TV series. She appears in episode 57.

Gruanfan is a monster which lives in the world of memories. An old man named Tomano desires to brought it to his world with playing his memorable violin song to the door card. With his efforts finally came in success, Gruanfan appears where she stops the time (save the old man, the boy whom always assist Tomano, Ayano and Musashi) played the old man's memories of him happily with his family. Despite this, however, he cannot enter his memory and decided to leave it only as a remembrance. The boy takes Gruanfan's door frame and rise it high, trying to get her back to her dimension. Musashi sees this and transforms into Cosmos where he enlarges the door as the monster leaves. The old man vanishes since the person whom summons Gruanfan will cease to exist and gave the boy Gruanfan's portal frame as a gift for believing and helping him. 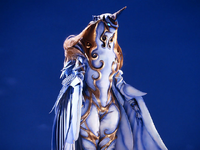 Add a photo to this gallery
Retrieved from "https://ultra.fandom.com/wiki/Gruanfan?oldid=511004"
Community content is available under CC-BY-SA unless otherwise noted.