Grost (グロスト Gurosuto) is an alien that appeared in Ultraman Taro episode 36 "Coward! The Breed Cried".

An alien invader from an extremely cold world, like others before him, Grost came to Earth to take over. He quickly made a home base out of a construction area and took control of the workers. When a child, Kiyohiko Miyasaka discovered that the alien took cover at a construction area he warned the workers in the area, but they didn't believe him. Then when the kid walked out of the construction area, the apartment they worked on started glowing!

When Kiyohiko and his older sister came to visit his sister's boyfriend, Iwatsubo's construction area, they noticed the people there started acting strange even Iwatsubo himself. Then as Kiyohiko's sister thought everyone at the construction area was tired, Kiyohiko had no one to reveal the news for the time being.

The next day, Kiyohiko goes downstairs of the apartment as the cold was bothering him. Then after sometime of exploring what happened, Grost's face pops out of the darkness, blinds the boy and commands his slaves to stop the child. After several bits of running and action filled scenes, Kiyohiko finally gets out of the deadly Grost slaves' traps. The kid tried to tell police but didn't believe him. In the meantime Grost is planning his way to take over the world. As ZAT doesn't believe the kid either, it seemed like all hope of Kiyohiko until he remembers that the alien's weakness was heat! Kiyohiko used coal and other extremely hot things to defeat his slaves. After he defeated the first wave of slaves other more powerful slaves try to attack him until Kiyohiko had the upper hand and used his flame stick to try to defend himself only for one of the slaves to freeze the stick leaving the kid hopeless! As the kid was getting choked ZAT finally came to their sense and Kotaro Higashi led to battle against the slaves. After a long struggle as the slaves take out most of the members, Kotaro lends Kiyohiko a ZAT Gun to shot the Grost face on the wall. This turns Grost into a giant monster but does free the former slaves to be back as humans.

Kotaro turns into Ultraman Taro and saves everyone in the building. Grost sees Taro with his back turned and decides to use his Freezing Gust to weaken Taro. Ultraman Taro is then nearly frozen and as ZAT tries to kill the alien their planes freeze too leaving Grost as complete power. Then as a last hope Taro uses the King Bracelet to melt all the ice and brings Taro back alive! As Grost was about to die of the heat Taro blows him up into many pieces leaving all of the construction workers at peace. 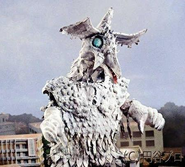 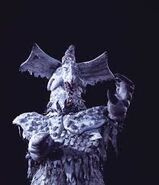 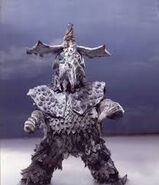 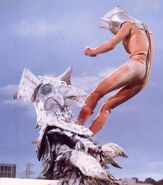 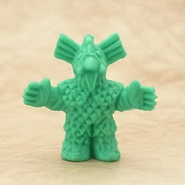 A Grost eraser
Community content is available under CC-BY-SA unless otherwise noted.
Advertisement