Grossyna (グロッシーナ Gurosshīna) is a Kaiju that appeared in Ultraman Dyna. He appeared in episodes 3 and 27.

Grossyna was a monster that first appeared 10 years ago and was struck down by GUTS. However, over the years, Grossyna's body had yet to rot away and was found by a lone surviving Cyclometra. The parasite then crawled into the body of the long dead monster and revived him. The next day, Grossyna began his movement in a forest, and came under fire of Super GUTS. However, due to the rational decisions of Asuka, Super GUTS's captain, Hibiki, was wounded and can no longer attend to battle. After discussing, it was decided to have Asuka use the Cyclometra mating call to lure Grossyna to a special area, where the machines by the name of "Laser Wire" will launch electrical "strings" at Grossyna, keeping it in place while Kariya, in the GUTS Eagle Gamma, will fire a fatal beam that will penetrate Grossyna's neck and kill it. However, the shot was useless as Cyclometra miraclously appeared and healed Grossyna, while enchancing its power. The enraged beast then snapped the wires and began to rampage, downing the already injured Hibiki. Asuka then transformed into Ultraman Dyna to fight the threat. However, the battle turned to the side of Grossyna due to his superior strength. Finally, Dyna blasted a hole through the body of the monster with the Solgent Beam, causing the very impatient Cyclometra to burst out and Dyna then killed it with the Flash Light Bullet. Awaken Asuka

Grossyna II was made by an unnamed boy that competed in the Alien Chern's Monster Tournament. Grossyna II was made from the already-existing data for Grossyna and proved to be either good or powerful enough to make it to the last round of the tournament where it fought Demagorg. Despite its efforts, it was defeated by Demagorg and eaten. Monster Game 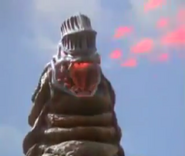 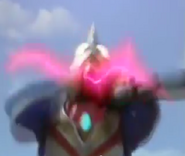 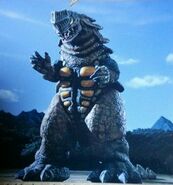 Grossyna with a hole in his neck (Solgent Beam Induced)

Grossyna getting trapped by the "Laser Wires" 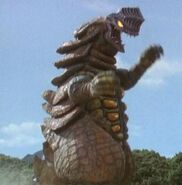