Return of Ultraman episode 27 "Go to Hell with This One Blow!"

Redman
Gronken (グロンケン Guronken) is a Kaiju with saws for weapons from the TV series, Return of Ultraman that first appeared in episode 27.

Gronken was a monster from Earth who first appeared during the night, attacking a group of giant statues and using his buzzsaws to slice one of them in half before disappearing into the night. A few days later while MAT was investigating the statue's damage Gronken appeared again, this time in the middle of a city. Gronken smashed and cut through several buildings and shrugged off MAT's assaults with great ease. During their assaults, Go's ship was downed by Gronken's buzzsaws, but fortunately he managed to transform into Ultraman Jack to face the monster himself. Jack and Gronken's fight was long and vicious as Jack managed to sever both of Gronken's buzzsaws, but Gronken continued to fight by using his jumping capabilities instead. In the end, it was Ultraman Jack who won by using the Ultra Kick to decapitate Gronken. Go to Hell with This One Blow! 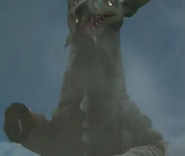 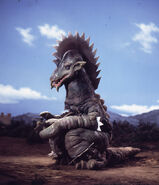 Figure of Gronken, by Bullmark. 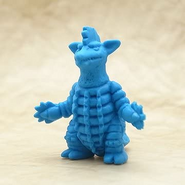