Gromite (グロマイト Guromaito) is an alien rock monster in Ultraman Mebius. It first appeared in episode 15 of the series.

Gromite was a space monster that was on a collision course with Earth, while encased inside of a meteor. GUYS managed to destroy the meteor but a chunk of it crash landed on earth, regenerating a new Gromite in its wake. GUYS tried to combat the monster while it was eating rocks and stones to heal itself further, but a malfunction in their ships made the task of stopping the monster impossible. Gromite then tried to hit the aircraft with a fireball, but Ultraman Hikari showed up to help the crew in stopping Gromite. Gromite and Ultraman Hikari battled with Hikari ultimately besting the monster, but before he could finish off Gromite with the Knight Shoot, Gromite created a diversion with is fireballs and escaped underground.

The next day, Gromite appeared in a city, causing destruction in its hunger for rocks and stones. GUYS was quick to respond, but couldn't do much to stop Gromite without their maneuver mode accessible. Eventually, GUYS's new aircraft, the Gun Booster appeared to battle Gromite, but was put in danger once Gromite started attacking it. Ultraman Mebius made his appearance to distract Gromite while Ryu of GUYS managed to successfully merge with the Gun Booster. Now combined, The Gun Booster outclassed Gromite's abilities quickly managed to cripple it by firing at its neck (Gromite's weak spot,) which left him at bay long enough for Mebius to unleash the finishing blow; a super-charged punch to the stomach which destroyed him completely. Phoenix Stronghold

Towards the end of the series, when Mebius was fighting the Dark Four Heavenly Kings, Alien Mefilas III created a second Gromite to demonstrate his powers to Mirai/Mebius. Gromite tried to attack Mefilas with a fireball, but he sent it right back to him, knocking it clean off its feet. Alien Mefilas then destroyed the Gromite with a blast of electricity from his fist. Mefilas's Game

Gromite is briefly seen battling against an Angross who was in the area. The two monster seemed evenly matched in strength. However, four black ships appeared in the area and ambushed the two monsters, killing Angross first with its blasts. Gromite tried to fight back with his light bombs, but the ships evaded the attack and Gromite was quickly destroyed in retaliation. The Pendragon Doesn't Rise to the Surface!

Gromite reappeared in the movie Mega Monster Battle: Ultra Galaxy Legends The Movie as one of Ultraman Belial's 100 Monster Army. He teamed up Mukadender, Froguros, Angross, Jasyuline, Lunaticks, Robuerga II, Alien Valky, Birdon, and Kelbim to take down Ultraman Mebius. He was killed by Gomora's Mega-Ton Tail during the final battle. 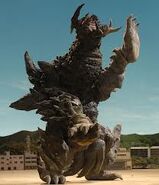 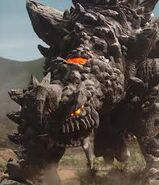 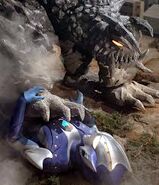 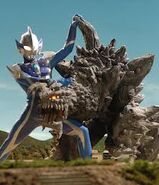 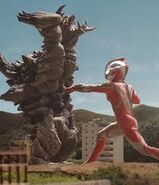 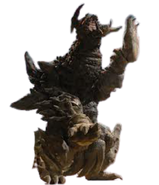