Ultraman Wiki
Register
Don't have an account?
Sign In
Advertisement
in: Gridman the Hyper Agent, Assist Weapons, Swords,
and 3 more

Destroyed
Gridman Sword (グリッドマンソード Guriddoman Sōdo) is a weapon used by Gridman. It is known as the Samurai Sword in Superhuman Samurai Syber-Squad.

The Gridman Sword was first conceived as Barrier Shield (バリアーシールド Bariā Shīrudo) and Plasma Blade (プラズマブレード Purazuma Burēdo) separately, designed by Ippei out of his hunger for Special Dog, a type of hot dog. This weapon continued its used by Gridman for various battles, and gains the Gridman Sword configuration from Unison and Anosillus, both are residents of Computer World who thanked Gridman for saving the latter.

Unfortunately, it was destroyed with other Assist Weapons when Kahn Digifer invaded Junk's server.

When Gridman merged with a Powered Suit (known as Grid Suit), he granted Hikari Kaizaki the Emulate Thunder Axe (エミュレート・サンダーアックス Emyurēto Sandā Akkusu), a copy of his former Assist Weapon to help her in defending the Diaclone troops from the Dimensional Parasite Monsters. The weapon disappeared after the Grid Suit ran out of power, since it was an energy construct made from Gridman's memory of the original weapon. Diaclone VS. Gridman

A shield made to repel any monster with ultrahigh electromagnet waves. It is able to deflect energy attacks through the use of the Super Electromagnetic Vortex (超電磁渦 Chō Denji-ka). However, it is useless against monsters with a high enough power.

A sword pulled out of the side of the Barrier Shield, it heats up to 1 million degrees to slash enemies. It can fire the Plasma Wave (プラズマウェーブ Purazuma Uēbu) and cut through a monster. The sword itself can also be used to defend against attacks.

The main configuration of Barrier Shield and Plasma Blade. It was unlocked after Gridman managed to rescue Anosillus, who upgraded the Gridman Sword's weapon cache. It heats up to 10 million degrees Celsius, and unleashes 1 trillion volts of electrical current. A drawback to its high power is the size of its attack which is always large. Its finishing attack is the Lightning Thunderbolt (ライトニング・サンダーボルト Raitoningu Sandāboruto).

The Gridman Sword being formed

Lightning Thunderbolt
An alternate configuration that forms a combat axe, the Thunder Axe (サンダーアックス Sandā Akkusu)'s known battle was against Shinobilar. Although never shown, it can summon a storm as its main finisher.

The Thunder Axe being formed 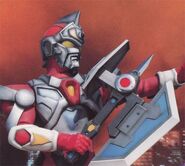