N/A
Gridman Sigma (グリッドマンシグマ Guriddoman Shiguma) is the younger brother of Gridman in a novel sequel series, Gridman the Hyper Agent: The Demon King's Counterattack. Sigma would have become the alter ego of Takeshi Todo, a reformed antagonist of the original series.

In 2015, Gridman Sigma made his first public appearance at the end of the anime short, Gridman the Hyper Agent: boys invent great hero.

Girdman Sigma was created both for the serial novel and Kazumitsu Akamatsu's desire to have both Thunder and King Gridman to fight side-by-side, hence his later form as King Gridman Sigma.

This plan was formulated back during the production of the original show. In the third quarter of the series, Takeshi Todo was meant to steal Gridman's data and become Khan Knight (カーンナイト Kān Naito), a rival character and Kahn Digifer's servant, before redeeming himself as Grid Knight (グリッドナイト Guriddo Naito). Additionally, had the original plan taken place without the aforementioned production problems, Grid Knight would star in a sequel season. As revealed in an old magazine called Denkou Choujin Gridman 2: Great Determination! Great Monster Encyclopedia (電光超人 グリッドマン2 たいけつ!かいじゅうだいずかん Denkō Chōjin Guriddoman 2 Taiketsu! Kaijū Daizukan), there was a design of a second Gridman, who was themed after a European knight. Despite his near-identical appearance to Gridman save his head, Sigma is designed by anime Mecha designer Hideo Okamoto (岡本 英郎 Okamoto Hideo).[1]

Khan/Grid Knight's main body. This sketching was thought to be lost until Kazumitsu found it among the fax papers in January 2020.[2]

Takeshi appeared as an adult in the anime Gridman short. After watching the battles (or rather, relieving past memories) of the previous Gridman, Takeshi is granted the Acceptor by the light of several monitors and transforms by shouting 'ACCESS FLASH'. Transforming into Gridman Sigma to face monsters in the real world 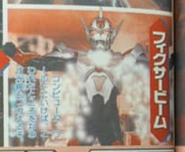 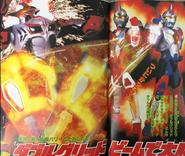 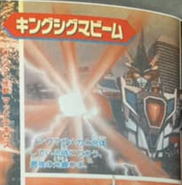 In the same vein as Gridman, Sigma can also arm himself with Assist Weapons (アシストウェポン Ashisuto Uepon), specifically ones that his brother uses. Given that Kahn Digifer had destroyed them in his final battle, it is more likely that they were recreated/repaired at some point of time. 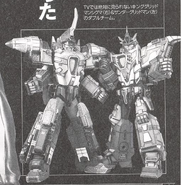 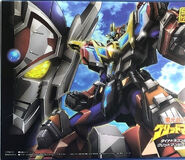