"If there was a space energy reading of zero, then there's nothing in front of Space Musketty. Literally nothing, I mean. Zero, a void. That light shown is our senses trying to perceive a total lack of information."

Greeza (グリーザ Gurīza)[1] is a monster born from the distortions of space, being the manifestation of a "hole" in space that gives off no signs of life. It is the main antagonist of Ultraman X.

Greeza's name comes from the words of Greed and Glee.

"Greeza targets the life energy of planets, and leaves nothing in its wake. After Greeza destroyed three planets rich with life, I followed it to this solar system. When Greeza sets his sights on Earth, I was only able to defeat it by pushing it to the sun. It all happened fifteen years ago."

At some unknown point of time, Greeza briefly met with Ultraman Tregear during his fall into darkness, the latter finding their common ground for their relation to "nothingness". Ultraman Taiga Novel: Tregear's Story／Blue Shadow Fifteen years ago, after it destroyed three planets filled with life, Greeza desired to destroy the solar system. As it raced into the Milky Way, it met resistance in the form of Ultraman X. All for One Both Ultra and the figure clashed each others in their travel sphere forms until they reached the sun, where X takes this opportunity to throw the villain into it. However, this had become his greatest undoing, as the villain's demise had set forth the Ultra Flare, with said wave trapped X in a form of computer data and banished him to the Earth. A Voice From the Starry Sky

"Come on, haven't you heard about this? One day, black lightning bolts began to strike this planet. Any monster they hit will go berserk, like they're being driven to destroy anything."
"Do you know what the Dark Thunder Energy is?"
"I'm sorry but I'm not that well-informed. But at this rate, your planet will be doomed. I've got it on good authority."

―Dada and Daichi Oozora during the former's confession.

Greeza had in fact survived its supposed destruction, revived from the waves of Ultra Flare and launched the Dark Thunder Energy on Earth to turn monsters berserk and has been doing it for at least 18 days, starting at around Mercury, and then moving past Venus to reach the Earth, according to the UNVER HQ at Geneva. Its activities were noticed by aliens hiding on the Earth, so much so that a Dada predicted that the Earth shall face extinction from the attack. To make things worse, the lightning was also being taken advantage by an evil faction during its debut, until they were defeated.

Sometime after a group Bugbuzuns' intrusion to Earth, Mamoru and Wataru spotted Greeza in its first form when they were flying past the moon and it's contact made the Space Musketty lose contact with headquarters. Greeza eventually landed on Earth and completely obliterated the UNVER base in Nevada and absorbed all of the Spark Dolls there because it sensed that place as the largest source of Spark Dolls in the world and that Earth's monsters are the most abundant in life energy. Greeza then turned into its second form and flew straight to the second largest source, which just so happened to be the Xio headquarters in Japan.

On its way to Japan, it is met by opposition by Xio USA in the North Pacific airspace and they launch Perseus missiles at Greeza, but it dodged them all and destroyed the resistance. It then zooms in on the Xio base when Daichi turns into Ultraman X and he turns into his Exceed X form immediately to stop it. After a quick tussle, X is joined by Hayato in the Sky Musketty and Cyber Gomora to stop Greeza, but the alien gains the upper hand due to its distortion, shielding, and strong attacks. Eventually he downs the Sky Musketty with its beam, and unrealizes Cyber Gomora with its vortex, which also interfered with the electricty in the surrounding area as well. X tried to use the Exceed X Slash on Greeza, but it absorbed him. Unfortunately for Greeza, this lead to a mistake as it was presumably killed as X blew it up from within. A Beautiful End

Soon afterwards, Greeza regenerated and re-enacted its attack on the Xio base and was met with resistance by Cyber Gomora again. Greeza made quick work of it and, at the same time, destroyed the Xio base with its energy attacks. The alien then absorbed all of the Spark Dolls at the base, even the recently revived EX Red King, Tsurugi Demaaga, and EX Gomora, until it transformed into its final form. Then, Greeza resumed its rampage on Earth despite the obstacle of Xio. Before he could finish them off, Wataru and Mamoru returned in the Space Musketty and destroyed the energy ball meant for Xio.

Soon enough, Daichi and X reunited and stood in Greeza's way once more. Even in his Exceed X form, the Ultraman couldn't keep up Greeza and its new powers gained from the Spark Dolls, including Gomora's Super Oscillatory Wave and EX Red King's Flame Road. But then Daichi reached out to Gomora and struck Greeza in the chest. This resulted in all of the Spark Dolls it absorbed coming to X and he united with him to form the Hybrid Armor. Greeza was eventually defeated once and for all with the Ultimate Xanadium, powered by all of the Cyber Cards and Spark Dolls. The Rainbow Land

During the evening after Z defeated Bullton, a strange dimensional rift appeared in the sky, heralding Greeza's arrival. Four-Dimensional Capriccio On the day after the fight against Bullton, Greeza had devoured eleven disaster disposal workers, making it as if they vanished into thin air. Riku Asakura contacted Haruki Natsukawa when he detected void vibrations on Haruki's Earth, saying that Bullton's destruction caused a hole to be formed in the universe as it was no longer around to bear "irrationalities" to sustain the universe. Just then, Greeza fully materialized and started to attack the city. Z and Geed transformed to fight against the void monster, and were then joined by Jugglus Juggler, transformed into Tri-King and then Five King. Still, their efforts were not enough to bring Greeza down. Geed decided to sacrifice himself by fusing with Greeza to trap it between reality and unreality, sealing it in its first form. He had told Z that a "needle" existed beyond the void, and gave Z his Ultra Medal for later use.

That night, Greeza had almost completely fused with Geed and became active again. Fortunately, after having acquired the Belial Medal from Celebro, Z transformed into his new form Delta Rise Claw, which had the power to withstand getting absorbed by Greeza. Z managed to free Geed from the void and pull out the Beliarok, which was the proverbial "needle" that was required to sew the hole in space and destroy Greeza. After a brief fight, Z and Haruki managed to convince the Beliarok to fight alongside them and finished off Greeza with the Deathcium Slash. A Warrior's Duty

First Form (第一形態 Dai Ichi Keitai) is Greeza's original appearance, which was prior to its arrival on Earth.

Second Form (第二形態 Dai Ni Keitai) is Greeza's humanoid form, which it obtained from absorbing Spark Dolls in UNVER Nevada Base. Aside from being sleeker, Greeza can also adapt to Earth environment.

Final Form (最終形態 Saishū Keitai) is the result of Greeza absorbing all Spark Dolls in Operation Base X. It appears as the second form donning a set of armor with protrusions.

During the second half of Ultraman X, Greeza constantly fired the Dark Thunder Energy towards Earth, causing the targets to be affected. Exposed victims tend to be empowered and went berserk, but fewer of them retain their free will. 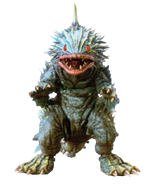 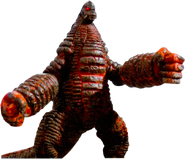 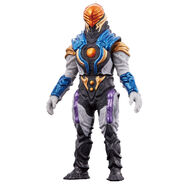