Ultraman episode 5 "Secret of the Miloganda"

None
Greenmons (グリーンモンス Gurīnmonsu)[2] was the first form of the carnivorous plant called Miloganda (ミロガンダ Miroganda). Greenmons then committed the murders of the scientists that brought him to Japan, before being stopped by Ultraman.

Greenmons' name originates from the combination of the words "Green" and "Monster."

The monstrous plant known as Greenmons originated from a small island off the coast of Japan. A group of scientists found it, but in its final form, a flowerlike plant. One of the scientists attempted to make it even larger but the flower fed on the gamma rays and reversed its growing cycle putting the plant stuck in its first destructive form. The plant creature escaped, ready to feed on the Japanese population! Police couldn’t solve the killings and the Science Patrol was brought in to help. They found trails of green goo near the killings and upon investigation, found chlorophyll within it.

While tracking Greenmons, Arashi was attacked by the creature. His fellow Science Patrol members soon arrived and hit the plant creature with lasers, causing it to fall into the water. Not long after, the creature returned but had grown to a gigantic size. Nothing could stop it this time as it crashed through buildings and ignored the Science Patrol’s ineffectual weapons.

Hayata soon transformed himself into Ultraman in order to defeat the lethal plant. The hero flew in, drop-kicking the kaiju, quickly starting the fight between Ultra and plant! As the pair battled, Greenmons unleashed it's poison gas, allowing the vile foliage to fall on top of him in an attempt to smother him. The creature, unable to devour the hero, rose up, allowing the red and silver giant to rise to his feet. With his power rapidly fading, Ultraman unleashed the Spacium Beam on Greenmons, causing the massive monster to fall in cascading flames. 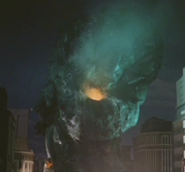 Figure of Greenmons, by M1. 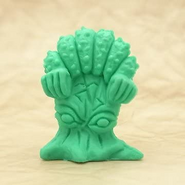