Green Gillar was an insectoid monster designed to slay Fireman by the Alien Green. Its three masters came to Earth to stop him, failing in their attempt via a bomb. The two agents in charge of carrying its blue capsule released Green Gillar in a last ditch effort, the resulting explosions killing its masters. The insectoid monster rampaged through a nearby farming village to attack a hydroelectric dam. Misaki turned into Fireman to stop the monster as it was repeatedly slamming on the dam. Not long into the fight Green Gillar used its venom to infect Fireman, the hero barely able to fight. The Scientific Attack Force distracted Green Gillar long enough to allow Fireman to purge his body of the venom. He then summoned his Fire Knife to sever Green Gillar's head and tail before destroying him with the Fire Flash. 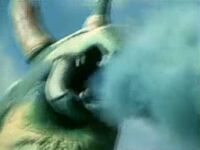 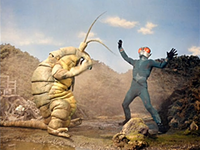 A poisoned Fireman vs. Green Giller 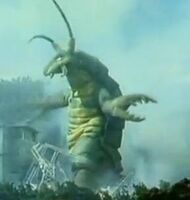 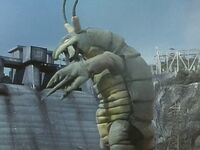