Kunji Hirano
Gray (グレイ Gurei) is an Alien Nackle (ナックル星人 Nakkuru Seijin) and was one of the main antagonist of Ultraman Ginga and a member of Dark Lugiel's dark agents.

Gray was a combatant in the Dark Spark War, and was transformed into a Spark Doll by Dark Lugiel. Alien Nackle is later freed by Lugiel to be his new agent after the defeat of Alien Icarus. After Dark Galberos is defeated, the evil and effeminate alien appeared before principal Shirai and teases her about what she just witnessed, claiming that the master of the dark forces was atually someone in the school (In fact it was Kyoko Shirai herself). Later in the episode he possessed Misuzu to Darklive into Super Grand King together. Apparently Ginga and Hikaru saved her from Nackle's control and eventually the school area from dimensional trap and defeated him by using Ginga Sunshine. It is likely that Nackle returned to space in his original form after Ginga defeated Dark Lugiel.

Alien Nackle Gray appeared as one of the hosts of this spinoff series while teaming up with his predecessors, Alien Valky and Alien Icarus.

He reappeared in episode 38, alongside Alien Valky and Alien Icarus on a desert planet after they were sucked into a wormhole. They then talked about Mega Monster Rush Ultra Frontier, the Rush Hunters team, and the monsters they fought. At one point, he and Valky wonder about what they would look like if they lived in the Rush Hunters' dimension. When they were done, they realize they can't get out of here and curse Ultraman Ginga.

In episode 53 (two weeks before the Ultraman Ginga S's first episode), Alien Valky and Alien Nackle Gray were floating in space while commenting on their master's defeat. Alien Icarus showed up and brought them to his self-created pocket dimension where he revealed them to future characters in Ultraman Ginga S as well as the new villains Alien Chibull Exceller, Android One Zero, Alien Guts Vorst and Chiburoids all by his retro television. With the episode coming to an end, they found a black hole and race themselves inside to return to Ginga's universe to watch the battle.

Alien Nackle Gray reappeared in episode 16 of Ultraman Ginga S along with Alien Valky and Alien Icarus. They teamed up with Alien Zetton Berume and the remaining Chiburoids, calling their team as Dark Lugiel Rangers (ダークルギエル特戦隊 Dāku Rugieru toku sentai) to stop Hikaru, Sho, UPG, and the Victorians from stopping Dark Lugiel's plan. He faced off against Queen Kisara before being obliterated by her powers along with a couple of Chiburoids.

In episode 90, he appears with the other two revealing that they survived the final battle but have to work as janitors for the UPG. In his free time, Alien Icarus invented the Icarus Pad to hack into UPG's Kaiju Database and take a look at Etelgar and all of those serving as his Eteldummies. Nackle Gray used the pad to look up Alien Empera but after Icarus revealed more minions, Nackle Gray fought with the others until she noticed Ultraman Victory's new form. After an alarm, Captain Yoshiaki Jinno appeared, busted them, and threatened them to get back to work.

In episode 100, Nackle Gray, along with the other two aliens and the two UPG members, visited headquarters to celebrate the 100th episode of New Ultraman Retsuden. He then took a look at Kaiser Belial and his army via the Kaiju Database. Near the end of his section, they were going to watch Ultraman Victory in Ultra Fight Victory but they were ordered by Gouki to get back to work, which both surprised and upset-ed the aliens. 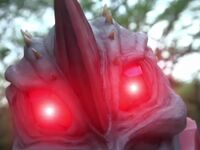 Gray used several Spark Dolls in his mission to give to evil-hearted humans and seed chaos for his master, Dark Lugiel.