A crustacean-like space beast, Grantella began to attack the countryside that Dark Zagi had brought it to with energy blasts. Just as the Night Raiders arrived, so did a familiar face. Despite vanishing with Dark Mephisto, Ultraman Nexus reappeared, this time with a new host: Ren Senjyu. The silver hero transformed, but it wasn’t the traditional red and silver color scheme that became known to the forces, but a new look: Junis Blue. Ultraman Nexus to the Meta Field and soon the battle was taken into the safety of the field. As the Night Raiders flew around, the fight between Grantella and Ultraman Nexus raged. The crustacean went to attack the Night Raiders with its fireballs, but Nexus leaped in front of the attack, taking the blow and saving the lives of the humans inside the fighters.

Before the two could go head-to-head yet again, a new type of Darkness Field opened up in the air. It pulled Grantella into the darkness before vanishing. The Unknown Hand had now made its presence known. The Night Raiders soon analyzed the data they gathered and realized this beast was much more powerful than it let on: the creature was testing this new Ultraman Nexus's power. When Grantella returned, only one Chrome Chester was launched to gather more data on Dark Field G. When Nexus arrived, his Meta Field was transformed by the Unknown Hand into a full Darkness Field G. Inside this battlefield, the crustacean began to unleash its full power on the hero. Though, Nexus managed to sneak on the behemoth's back and launch the Cross-Ray Schtrom, seemingly killing the Beast. However, the Unknown Hand revives Grantella, even moderate his cannons stronger and gain homing abilities. Though, Nexus can evade all the blasts, he was struck by one blast. However, Nexus managed to overcome the blast and use Arrow-Ray Schtrom to Grantella. This time, the Beast was reduced to blue particles which faded away. 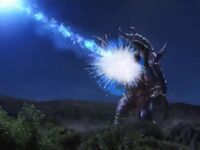 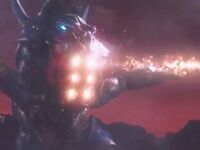 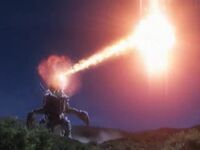 Tail Cannon
Add a photo to this gallery 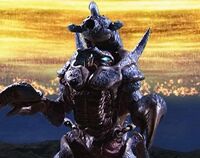 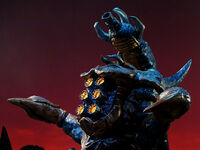 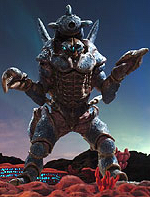 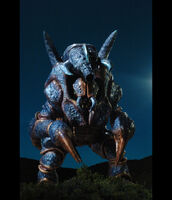 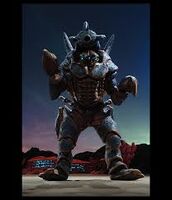 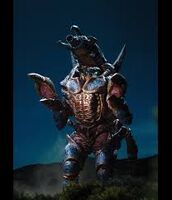 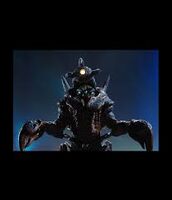 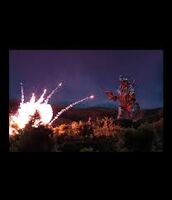 Add a photo to this gallery
Retrieved from "https://ultra.fandom.com/wiki/Grantella?oldid=528040"
Community content is available under CC-BY-SA unless otherwise noted.