Ultraman Max episode 30 "Courage Is from the Heart"

Awakened by a curious boy who strayed too close to his cave, Grangon emerged from the side of a volcano and began to attack whatever was in his path of destruction. As he began his violent attack, the volcano he emerged from began to erupt to everyone's horror. DASH was quickly on the scene and after slowing down Grangon with their missiles, a cooling missile was fired at the monster, solidifying it in ice and weaking him for DASH to fire another barrage of missiles, blowing the monster to pieces and killing him successfully. Shortly after DASH left to deal with the newly revealed Lagoras, the volcano that Grangon emerged from was still erupting, causing a lava flow to overtake the pieces that made up Grangon's former body. Coating in his very own element, Grangon was revived and resumed its rampage.

Now revived, Grangon continued his trek towards civilization, but as DASH tried to hold him back, Grangon and Lagoras met and the two monsters viciously battled each other. Neither Grangon nor Lagoras could best one another. During the battle Kaito took off with one of DASH's jets to take down both monsters at once, but it was quickly downed by Lagoras's ice breath. To both monsters' misfortune, Ultraman Max arrived and merged with Kaito before the jet could crash and now both monsters had to deal with the newest Ultraman to arrive on Earth. Neither Grangon nor Lagoras were much of a match for the Ultra, and together were both destroyed by Ultraman Max's Maxium Cannon.

In episode 30, the carcass of a Grangon was spotted by DASH. It was revealed that the Grangon was killed and absorbed by another Lagoras who had evolved into Lagoras Evo. Courage Is from the Heart 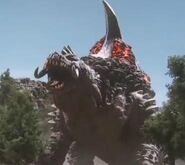 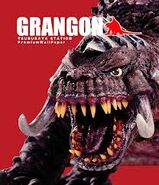 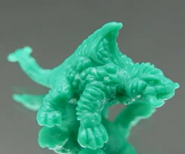 A Grangon eraser
Community content is available under CC-BY-SA unless otherwise noted.
Advertisement