Alien Godmes come up with a plan, luring the Koseidon Corps into the Dinosaur Graveyard. Grandon was created from modifying a dinosaur, and first appeared after they started an cooling system. Koseider comes to fight the beast and save one of the team members trapped in a explosive egg chamber. Grandon fights Koseider equally, but Alien Godmes warn the hero that if he kills Grandon, the eggs will explode, killing the team mate. In order to counter this, the hero stops time, right before Grandon gets stabbed by a icicle, and saves his teammate. After doing this, Koseider undoes the time stopping, causing Grandon to die from the icicle piercing it's stomach. 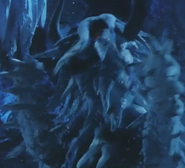