Grand King:
Super Grand King: TBA
Super Grand King Spectre: TBA
Maga-Grand King: TBA
Grand King (グランドキング Gurando Kingu) is a cyborg Kaiju that first appeared in Ultraman Story as the secondary antagonist. Though the first Grand King is a chimeric robot, empowered by the spirits of several opponents previously fought by the Ultras, numerous unique forms of Grand King exist that appear to be entirely new, rather than combinations like the original.

While Taro was fighting Enmargo on Earth, Juda combined the spirits of Alien Baltan, Red King, Gomora, Alien Mefilas, Eleking, and Alien Hipporit into a monstrous robot known as Grand King. The robot took repeated assaults from Ultraman, Seven, Jack, Ace, and Zoffy without even slowing down. Firing back, Grand King brought down each of the Ultra Brothers. Soon the fight was taken to the surface of an alien world where there is no life to minimize damage. The Ultras tried their best, but Grand King was too powerful and continued to shrug off their strongest attacks as if they were nothing. Just as it all looked grim for the five Ultras, Taro returned from his battle on Earth to assist his comrades in stopping the machine. However even after joining the fight, Taro and the brothers were still no match for Grand King's strength and armor. It was then that the revived Father of Ultra sent out an order so the five brothers fused with Taro so that he would have enough power to bring down the juggernaut. Once they did this, Taro managed to topple the goliath. Grand King refused to go down without a fight, resulting in Taro using his new Cosmo Miracle Ray. An attack so powerful it was capable of blowing through Grand King's armor and destroying the mechanical monster for good. With Grand King destroyed, Juda was dragged back to where he came and was never seen again. Ultraman Story

Here, he was Darklived by Alien Nackle Gray and a corrupted Misuzu. As Hikaru/Ultraman Ginga and Tomoya/Jean-Nine realized this, Ginga advise Hikaru to enter Misuzu's mind to reason with her. At the same time, Hikaru's friends and Misuzu's father transformed themselves into Ultraman, Ultraseven, and Ultraman Tiga. With Jean-Nine, they tried their best to hold off Super Grand King but failed due to the Ultras' time limit and being overpowered at by the monster. When Hikaru finally convinced Misuzu to free herself, she exited Super Grand King, leaving Nackle Gray alone in charge of it while entering Ultraman Ginga and recharged the Ultra's energy. Together, they defeated the robot with Ginga Sunshine, gaining Alien Nackle's and Grand King's Spark Dolls. Darkness and Light

Super Grand King reappeared in this special as Super Grand King Spectre (スーパーグランドキング・スペクター Sūpā Gurando Kinggu Supekutā), where he receives a similar upgrade to his master, Juda Spectre, being gold and silver in color and wielding a giant sword. In this appearance, Super Grand King looks similar to his original form.

Super Grand King Spectre was created by Juda Spectre to defeat the Ultra Brothers and to destroy everything else after that. After firing his energy blasts at the Ultras, Ace launched a Vertical Ultra Guillotine at Grand King but Grand King destroyed it by swinging his Bat Calibur. Then, Leo and Astra used the Leo Kick and Astra Kick respectfully at him, but the kicks weren't enough to counter the energy blasts. Ginga Victory then launched Mebium Shoot at the robot but Grand King overpowered it with his Chest Laser and even separated the two Ultras. While Victory went up to the distortion to challenge Juda Spectre, Ginga, along with the other Ultras stayed behind to deal with Super Grand King Spectre.

After Super Grand King Spectre launched more energy blasts, Ginga launched Ginga Thunderbolt to weaken him a bit so that the other Ultras can deal more damage to him in close combat.

When Victory used his powers in Knight Timbre mode to distort Juda's distortion to his own, the particles from that said dimension weakened Super Grand King Spectre enough to be left immobilized and was defeated by a combination of Ace's Metalium Beam, Leo and Astra's Ultra Double Flasher, and Ginga's Ginga Cross Shoot while Victory defeats Juda once and for all with his Knight Victorium Break.

"The red, horned giant sealed away the giant, malevolent beast that shakes the Earth, with the power of the dragon veins."

"I'll introduce you to a much nicer sound than that melody you play... The roar of Lord Monster!!" 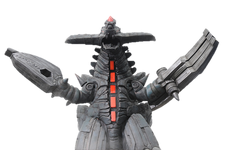 Maga-Grand King (マガグランドキング Maga Gurando Kingu) was one of the Lord Monsters created by Maga-Orochi, representing the element of Earth. It was sealed away by Ultraman Taro in the ancient past using ancient Feng Shui.

On a day like any other day at around 3 PM, a large sinkhole emerged in the Minamigawa business district. Using his Ultra senses, Gai Kurenai immediately discovered that Maga-Grand King, "The Earth Lord Monster" was responsible for all of this, despite him being sealed in his sleep at the moment. Soon after that, another hole opened up, taking some more buildings with it, It was then revealed that his arch nemesis, Jugglus Juggler, planned on neutralizing the Ultra Fusion Card that sealed up the monster's and awakening it by using the Kaiju Cards (shown: Telesdon, Antlar, Gomora, and Golza) to awaken the monster by which they simultaneously disrupted the qi of the Feng Shui seal and had it absorb their strength in hopes of using its powers to swallow everything on the surface. This would allow the monster awaken despite its seal still remaining.

Despite some intervention from Gai, the vile fiend managed get rid of the last two dragon veins, and succeed in his mission. Maga-Grand King rose again, and Gai transformed into Ultraman Orb to stop him. Although the Ultra managed to dodge his empowered drills with his accelerated speed, his physical attacks failed to daze the monster. Orb launched a Sparion Beam at the robot, which seemed to just stun the beast. Maga-Grand King retaliated by firing large lasers from his chest. After avoiding a few blasts, Orb began to run out of time. Avoiding another blast, he noticed that the beam was reflected off of the glass of the building behind him. Knowing this, Orb beckoned Maga-Grand King to fire yet another laser and, Orb used the Sparion Shield (Mirror Type). After a small struggle, Orb managed to reflect the beam back at the Grand King creating a hole that exposed it's insides, Orb fired another Sparion Beam, this time into the hole, causing Maga-Grand King to explode. Jugglus Juggler obtained Maga-Grand King's Kaiju Card through the use of his Dark Ring while Gai obtained Ultraman Taro's Ultra Fusion Card from the monster's Maga-Crystal.

Saki Mitsurugi transformed into Grand King Megalos (グランドキングメガロス Gurando Kingu Megarosu) in her attempt to defeat Ultraman Rosso and Ultraman Blu. When it arrived, it first fired its machinegun upon the brothers and Gomora (who they were initially fighting), its explosive bullets halted their fight and knocked them back. Then, Gomora rushed towards Grand King Megalos, firing its Super Oscillatory Wave at it, only to have it deflected away and soon after, Grand King Megalos destroyed Gomora with its Megalos Blaster. Grand King Megalos then turned its attention to the brothers and charged at them, while deflecting all of their physical and beam attacks and pushed them away without much effort. It then deployed its energy blade against them and countered the R/B Slugger Blu with it and its tough armor. Near the end of their battle, Katsumi and Isami tried to turn into Ultraman Ruebe but they fail as its power rejected them. Grand King Megalos launched its back spike projections and used to fire lasers against the Ultraman siblings. In a final effort to destroy it, Blu then changed into his Ground Form and used his Earth Bringer against it, to only have blocked by Grand King Megalos' barrier. Finally it proceeded to use its mouth beam upon them, but Rosso used a barrier to deflect the beam back to it and with a simultaneous second Earth Bringer from Blu, Grand King Megalos was defeated. Memory of StardustCandies and Manju 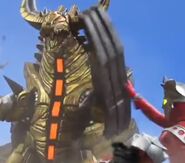 Fire Grand King (ファイヤーグランドキング Faiyā Gurando Kingu) is a special model of Grand King that is completely red. It is based on Super Grand King's body and was only released as an Ultra Monster DX figure.

Super Grand King became a Spark Doll in the conclusion of the Dark Spark War due to the Dark Spark's powers. His Spark Doll was kept in Dark Lugiel's collection, and given to Alien Nackle to give to evil-hearted humans to seed chaos.

After Dark Lugiel's defeat, Super Grand King's Spark Doll is likely to have reverted back to its original form and depart Earth to return home.

Bandai released Grand King twice, once as a normal 6 inch figure and again as a DX Spark Doll. The normal figures have 4 points of articulation, both arms, and both legs. They are highly detailed, but one variation has yellow markings, something the original never had.

The Spark Doll version was a DX (deluxe) release of Super Grand King. It has a brown-rust colored scheme, and is highly detailed. It is compatible with either the DX Ginga Spark or the Dark Spark. It stands 6" tall, and features 5 points of articulation (right arm, left shoulder and hand, and legs). A "Fire Red version," painted a metallic dark red, was released as a promo at the Ultraman Festival 2014.

A DX Super Grand King Spectre was released in 2015 to coincide with Ultra Fight Victory. The figure features a new gold-on-black color scheme, with new head crests as well as a Bat Calibur attachment, which constitutes a sixth point of articulation.

The Ultra Monster Orb DX release of Maga-Grand King features a clay-blue/slate-grey base color, with silver highlights on his dorsal spines and claws, with red for the Maga-Crystal, eyes, and chest lights. The mold for the figure has been updated from his previous Super Grand King releases, much like the suit. The differences are most notable in the shape of the tail club, the positioning of the legs, and of course a new head which can rotate.

A Banpresto plush Grand King was released in yellow-gold as well. 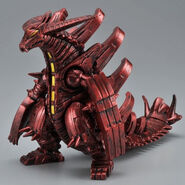 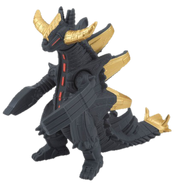 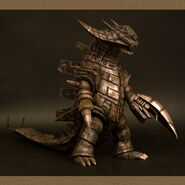 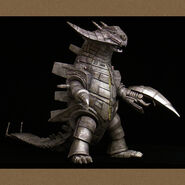