Return of Ultraman episode 44 "To the Starry Sky with Love"

Redman
Granadas (グラナダス Guranadasu) was a Kaiju from the TV series, Return of Ultraman. It first appeared in episode 44.

Granadas was brought to Earth by the Alien Centaurus, it burst from the ground and began its relentless assault. Engulfing the streets in blue flame, the beast was confronted by MAT. Showering the forces with missile-like blasts from its maw, nothing could stop it. As blue fire danced around him, Go summoned Ultraman Jack into action! The hero was thrown to the ground, blue fire burning at his body.

Having seen the kindness and love in humans, Centaurus revealed her true self and charged her own monster. She tackled it and together they fell, falling off a cliff where the alien activated her self-destruct, killing them both in a huge explosion. To the Starry Sky with Love

Granadas reappears in Redman episode 66 where he fought the alien hero at a beach. After going towards each other, Granadas held off the hero at bay by launching explosive missiles at him from his mouth. When entering close combat, the monster actually gained the upper hand thanks to his tough exterior and sharp claws and it only got worse for Redman when Dorako showed up to help him. The monster then stood back and watched, thinking Dorako will take care of the job for him, but Redman dispatched him for the moment so he can kick Granadas towards a rocky cliff face, resulting in his defeat. 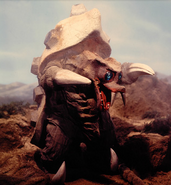 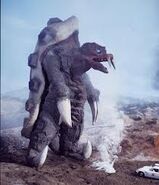 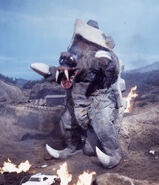 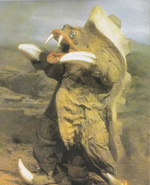 Figure of Granadas, by Marmit.