None
Graikis (グライキス Guraikisu) was a Kaiju who first appeared in Ultraman Dyna episode 44. It was created when a Sphere assimilated with Ice Venus, artificial bacterias developed by TPC as part of terraforming Venus.

After losing connection with a bacteria breeding/landing pod on Venus, Super GUTS traveled to Venus in hopes of recovering the lost specimens and data of the breeding program. However, unbeknownst to them, the bacteria was mutated by Sphere into Graikis and sent to prowl the Venus atmosphere. As the Clarkov NF-3000 descended, it became under fire by Graikis and unable to strike back due to all missiles being destroyed by the atmosphere before even reaching their target. Graikis moved through the Venus atmosphere like a fish in water, forcing Super GUTS to abandon all of their missiles to create a smokescreen and escape. Asuka boldly rushed off in the Guts Eagle Alpha Superior, followed by Ryo and Kariya.

On Venus, they discovered the destroyed landing pod and Sphere, who had transformed into a spaceship the protected it from harm. Graikis appeared and downed Asuka's jet, causing Ultraman Dyna to appear. Dyna and Graikis began to fight, but Dyna was easily overpowered by the combined force of Sphere's laser beams and Graikis's fireballs and natural strength. Dyna then transformed into Miracle Type, using clever teleportation abilities to confuse Graikis. However, Dyna tried to fire his Revolium Wave, but failed and was being slowly forced by Graikis towards a pool of lava.

With a sudden burst of courage, Ryo and Kariya were able to destroy the Sphere spaceship and give Dyna an opening. Dyna then transformed back into Flash Type, and executed a chop directly to Graikis's forehead, destroying the Sphere within and causing Graikis to return to his bacteria form, falling from the sky like snow. The Snow of Venus 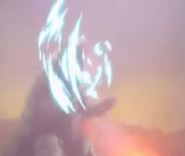 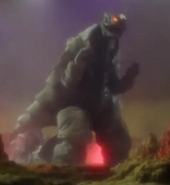 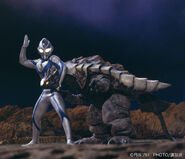