Watching Ururu fail a total of 20 times, Gottes exploded from his hiding spot, attacking and forcing Ururu to fight the Izenborg team himself. When the Tyrannosaur failed, Gottes took over as the cruel and ruthless ruler of the dinosaurs, whipping the ones who disobeyed him. Soon, his wife, Zobina, joined him, and the two sent a new army of Dinosaur Monsters to attack the human world. Gottes, unlike Ururu, wasn't afraid of the Izenborg ship, or even the red and green hero, Izenbo himself, and constantly challenged him to sword fights, and soon, Gottes awakened the Magmadons, six of them, to appear on the six other continents, while he and his other monster, Kirasaurus, attacked Japan.

But soon, after a brutal fight with Izenbo, Gottes fell to the hero's mighty blade, and the red and green cyber giant flew into space to train in fighting by defeating aliens. 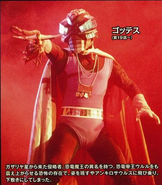 Gottes and his wife in Kaiju Bar
Community content is available under CC-BY-SA unless otherwise noted.
Advertisement