Gorothunder was considered a god of lightning, who controlled lightning throughout the universe. It is said that all who see him will meet their end. He was summoned to Earth by Ultraman Tregear to wreak havoc on humanity.

Gorothunder descended in a storm cloud near Kana Sasaki and Hiroyuki Kudo. He took interest in the former and captured her in his belly button piercing prison before growing to giant size. Hiroyuki was unsure of what to do since fighting him would endanger Kana, but Ultraman Taiga convinced him that they cannot save her if they do not take action. Hiroyuki transforms into Taiga to fight Gorothunder, but quickly changed to Ultraman Titas after getting knocked down. He used the Electro Buster, but it was overpowered by Gorothunder's beam, and he was then knocked down by Gorothunder using his club. Kana awakened and cheered Titas on, before he fired the Astro Beam at Gorothunder to knock him away. Titas changed back to Taiga and transformed into Tri-Strium.

Using the Taiga Tri Blade, Taiga narrowly slashes off Gorothunder's belly button prison, setting Kana free. He then uses the Titas Burning Hammer to finish off Gorothunder, who used his own beams in a futile effort to attack him. Withstand the Lightning Strike! 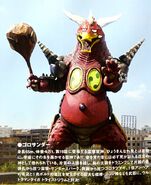 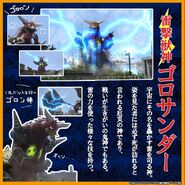