None
Goro (ゴロー Gorō) is a monkey Kaiju that appeared in Ultra Q episode 2.

Once a normal monkey, Goro was exposed to the drug Helypron Crystal G. The drug modified Goro's body, transforming the monkey into a towering primate behemoth. The creature escaped into the wilderness where it quickly became friends with the man named Goroh. The two stayed together as the monkey's hunger and playful nature made it start to take more risks.

It began to swing from rope ways and attack passing milk trucks, quickly forming an insatiable appetite for milk. However, as humanity grew tired of the ape's recklessness, Goro was arrested and taken to Tokyo. The ape began to head into town to rescue his friend, but local authorities were quick to attack. As bullets tore into its body, Goro was sent into a rampage! The ape began ripping apart the city until his friend was freed. Goro was tricked into delivered it a canister of tranquilizer-laced milk to stop it's rampage. After happily drinking the milk down, Goro fell asleep. Unable to hurt anyone, the ape was relocated to a new island home, an island populated with other giant apes much like itself. 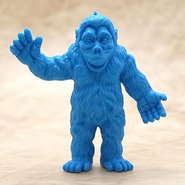 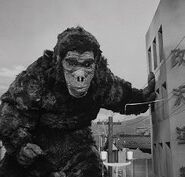 Goro and Todola behind the scenes.
Community content is available under CC-BY-SA unless otherwise noted.
Advertisement