Gorbagos was a nocturnal Kaiju that lived in the mountains. First sighted through a photograph taken by Jiro. MAT arrived on the scene to investigate, but unfortunately, could not find the Kaiju due to Gorbagos's Camouflage ability. Go ventured further into the valley (constantly hearing Gorbagos roars due to his Ultra Abilities) only to discover a group of partying teenagers in a cave. He tried to warn them of the danger and get them to leave but they instead made fun of him. Their party awakened Gorbagos, who became annoyed and appeared to attack. But when Go pulled his gun, the creature retreated back into the caves. Outside as MAT continued looking around, Go helped MAT discover the Kaiju as he was sleeping on the side of a cliff. As they attacked it, Gorbagos chose to retreat by turning invisible.

Now knowing Gorbagos was on the loose, MAT began the Rainbow Operation to trap the monster. When they found Gorbagos and attacking him, as Gorbagos was fleeing, the Kaiju was dosed with paint, leaving him unable to turn invisible again. Now angry, Gorbagos took the offensive and spat his fireballs at MAT downing Go while he was in his jet. Fortunately, Ultraman Jack managed to appear and was soon on the attack. Both Jack and Gorbagos were evenly matched, but as Jack was gaining the upper hand, Gorbagos tried to burrow away. Jack fired the Spacium Beam into his back, killing Gorbagos.

Figure of Gorbagos, by Bullmark. 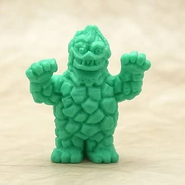 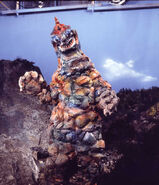 Gorbagos when covered in paint