When a small planet in the Triones M81 galaxy exploded, a dark energy shadow formed from that planet and headed straight to Earth. It then turned itself into a monster, though it was disguised as a dark, feature-less drawing for the time being.

The next day, a bunch of kids drew on the same walls and one of them, named Masahiro, noticed the shadow blotted monster and decided to add in some features, along with his friends, and he named it Gongoros. The other day, a middle-aged lady noticed the monster drawing but when she kicked it, it's eye flashed making her think it was an illusion. When day breaked, the monster absorbed the energy from the sun and became more and more life like until it became resurrected and clumsily rampaged throughout the city and he noticed balloons nearby and ate them. The attack team ZAT showed up in their aerial attack ships and attacked him but Gongoros was still standing. After countering them with his flames and stink gas, the monster reverted itself back into a drawing.

When Masahiro was forced to clean it up by both the attack team and the owner of the walls, the monster came back to life again and continued to attack the city with it's attacks and was once again countered by the defense force but they realized that it's body is perfectly inelastic, making all of their weapons useless. ZAT member Kotaro Higashi transformed into Ultraman Taro to stop him but the monster had him at a disadvantage from the start. Taro then realized that the monster was made out of graffiti after firing a special energy beam from his hands and then he used his Wipe Laser to turn the monster two-dimensional and literally wiped him away like a window wiper. The blue energy orb that remained of him was then blown up by the Ultra's Strium Ray, making cherry blossom petals fall down onto the city. 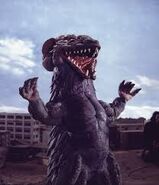 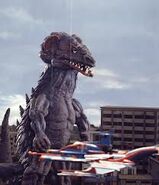 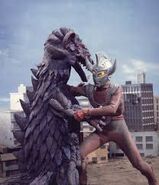 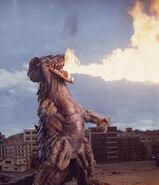 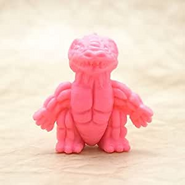 A Gongoros eraser
Community content is available under CC-BY-SA unless otherwise noted.
Advertisement