(Normal)
(Dark Thunder Energy effect)
Gomess[2] (ゴメス Gomesu)[3][4][5], scientific name Gometius[2] (ゴメテウス Gometeusu)[1][6], is the very first Kaiju to appear in the Ultra Q TV series, which makes it also the very first Kaiju to appear in the Ultraman Series. As a result of this, as well as the interesting nature of the creation of his first suit (having been built by modifying a Godzilla suit), Gomess is one of the most popular monsters to have appeared in Ultra Q, and has gone on to become a recurring monster in the Ultraman Series.

Gomess was a Kaiju who, in ancient times, was the predator of the Kaiju Litra. In the present day, he was disturbed from his hibernation by a group of miners. He attacks the mining site where he was awakened. However, a Litra was hatching from her egg and engaged Gomess in battle. Gomess is killed by Litra's Citronella Acid attack. However, this cost Litra her life as well and both monsters died together. Defeat Gomess!

When the ZAP SPACY's ship, the Pendragon, crashes on the desert planet Hammer, Gomess is the first monster to appear. Magular also appears and does battle against Gomess, but Gomess easily overpowers Magular until he turns his attention to the Pendragon. Rei sends out Gomora to battle the two Kaiju and manages to destroy Magular. Gomess was revealed to be a Battlenizer monster and was called back by his unseen master before Gomora could finish him off. Gomess reappeared in the next episode when Rei used Litra to search for Alien Hook. This time, his master, Alien Guts appeared. After a battle with Gomora and Litra, Gomess was destroyed and Guts fled the scene. Reionics Hunter (episode)Reionics Battle

Gomess (as well as Arstron and Gubila) is one of the monsters who has been revived by Alien Bat to serve him. Gomess works alongside Gubila and double teams Ultraman Cosmos. Shortly into the fight, Ultraman Zero (whom was only 5 meters tall,) shows up and evens the odds by battling Gomess (S). Despite his smaller size, Zero is strong enough to hold off Gomess (S) long enough for Ultraman Cosmos to calm down Gomess with the Full Moon Rect, turning the monster good. However, Gomess (S) was tragically murdered by Alien Bat for his failure. Ultraman Saga

Gomess participated in the Dark Spark War fighting alongside various monsters against Ultras until he was turned into a Spark Doll by Dark Lugiel. Town of Falling Stars

It is likely that he returned to space in his original form after Ultraman Ginga defeated Dark Lugiel. Your Future

Gomess (S) reappeared in Ultraman X episode 15. Like the other monsters, it can be assumed that he was turned back to normal after his Spark Doll was completely restored by the Ultra Flare event.

It first appeared at 4:13 in the morning, burrowing out of the ground and causing destruction to a local village until it burrowed back underground and caused local earthquakes as it moved underground until it arrived in Area S2-6.

Once there, he started to rampage again, but this time, he had opposition from Xio but their attacks couldn't hurt the monster and decided to retreat when Daichi transformed into Ultraman X. They both fought well until Gomess (S)'s strength gained the advantage causing X to use his Cyber Bemstar armor. He threw his shield at Gomess (S) causing him to flinch and decided to retreat and dug back underground before X could finish him off with the Xanadium Beam.

He stayed inactive for a while until he was struck by the Dark Thunder Energy and sported red eyes, in a similar fashion to Tsurugi Demaaga and was meet by Xio and Ultraman X in opposition again and this time he used his new abilities to gain the upper hand against them until the Xio captain, Shotaro Kamiki, realized Cyber Gomora to help out X and gains the advantage over Gomess by using his combat skills to let Cyber Gomora fight at close combat with him. Unfortunately, he ended up losing but wasn't about to give up when X transformed into his Exceed X form and double teamed Gomess (S).

Gomess (S) ultimately lost when X used his Exceed X Slash on the monster, relinquishing the Dark Thunder Energy from within his body, Cyber Gomora launched him into the air with his Cyber Super Oscillatory Wave and X turned him into a Spark Doll with his Xanadium Beam. A Soldier's Back

In the final episode of Ultraman X, after Greeza destroyed the Xio base, Gomess' Spark Doll was absorbed by Greeza. After speaking out to Gomora and striking Greeza right in the center of his chest, Gomess, along with all of the other Spark Dolls, traveled to X and united with him. Cyber Gomess' power was used to help form the Hybrid Armor and power up the Ultimate Xanadium to defeat Greeza once and for all. Gomess, along with the numerous other Cyber Cards and Spark Dolls, then appeared and thanked Daichi as he thanked them. The Rainbow Land

Gomess appeared in episode 24 of Ultraman Orb, where he, alongside Demaaga and Telesdon, rose from underneath Tokyo, but before they could attack, Ultraman Orb appeared in his Hurricane Slash form. However, as he said his catchphrase and the three monsters gathered to start the fight, all three of them suddenly fell to the ground, dead. Orb could only stare at the massacred monsters as he was saddened by their deaths.

It was first seen fighting Ultraman Blu Aqua and Ultraman Rosso Wind, but the Kaiju's brute strength was too much for the Ultras, causing the latter's Color Timer to flash.

Seeing his brother in trouble, Blu transformed into his Ground form for the first time and held the upper hand against Gomess. When his Color Timer began to flash, Blu used his Earth Bringer attack on the Kaiju and Rosso, using the Orb Ring NEO, destroyed Gomess with his Sparion Beam. The Minato Family Holiday

Gomess appears in the vicinity of Chōfu, Tokyo (specifically nearby BicCamera KEIO CHOFU Store), menacing several dozen civilians. The ancient mammal however is intercepted by Sevenger, and despite being twenty meters shorter then the robot, the underground mammal quickly out maneuvered the robot. The beast got distracted when Haruki Natsukawa and a small dog were hiding under Chofu City Cultural Hall Tazukuri, and was punched into a building by Sevenger, where it ceased activity. Chant My Name!

A 50-meter-class Gomess emerged from the underground alongside Demaaga and Pagos in their attempts to eliminate Ultroid Zero out of fear of the D4 weapon it possessed. The three monsters fought with Ultroid Zero before they were joined by Takkong and King Guesra. Ultraman Z also entered the battle but managed to drive off the latter two Kaiju back into the ocean. Under pressure from Director Kuriyama, who had been possessed by Celebro, Yoko Nakashima fired Ultroid Zero's D4 Ray at the three remaining Kaiju, obliterating them. Prelude to a Nightmare

Gomess makes an appearance in this film as one of the numerous S-Class Species that appeared in Japan, resulting in the creation of the SSSP. Gomess was the very first monster to emerge during the mass appearance, breaking out from a mine and rampaging through the surrounding mountains. Gomess then engaged in battle with the JSDF, but was killed by a detachment of tanks unloading their weapons on him.

In Ultraman X, Gomess's Spark Doll was awakened by the Ultra Flare, which caused the monster to rampage. It was reverted back into a Spark Doll after Ultraman X defeated it.

Gomess reappeared in the puzzle role-playing game for mobile devices, Ultraman Galaxy as a C (Common) card that you can unlock him in one of the levels in the game with a high chance of getting Gomess. 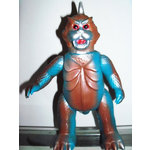 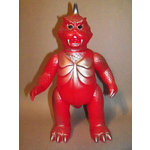 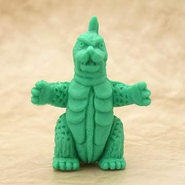