New Ultraman Retsuden episode 43 "Revived Light! The Earth is Ultraman's Star!"
Gomenos (ゴメノス Gomenosu), alternatively called Ganemos, is a monster that was the subject to mind-control by Dr. Inamori. A second one later appeared to fight against Zog and the Dobishis.

XIG was doing background checks on how Zonnel appeared, but soon they learned that Hiroya Fujimiya (Ultraman Agul's host) was responsible for making a mind control device on Zonnel, and also planned to control other monsters. Dr. Inamori (Hiroya's assistant and fiancé) learned about a monster named Gomenos and had plans to control it. Within that time Gomenos appeared and soon Dr. Inamori knocked out the creature with the control device. But, because of an error in the device, Gomenos got up and burrowed away and to make matters worse, Gamu Takayama was expelled from XIG on suspicion of working with Hiroya. Later, Gamu finds Inamori using Gomenos and attacking Team Crow. She told Gamu about how humans were threatening the Earth. But Gomenos snapped out of its mind control and then launched a fireball at her. Gamu then transformed into Ultraman Gaia. Gaia fought well until Gomenos grabbed him and started to drain his energy but, Gaia managed to get free, in time just to see Hiroya spend his final moments with Inamori, who then died, causing him great grief. Gomenos gets back up and shoots fireballs, which Gaia deflects, and then after a short fight, Gomenos is destroyed via the Photon Edge. Gamu Expelled!

Months later, Zog and the Dobishis came to Earth but several monsters including, Gomenos II, fought back. He launched fireballs at the swarm but, they kept coming and in reaction transformed into a Kaiser Dobishi. Gomenos kept fighting until the swarm ended and peace was restored. Earth is Ultraman's Star 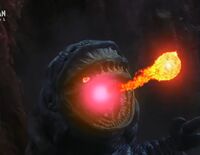 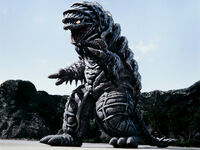