Golza: Fire Golza:
Golza[1] (ゴルザ Goruza), called by Yuzare as the "Earth-Shaking Monster" (大地を揺るがす怪獣 Daichi o Yurugasu Kaijū), is an ancient race of Kaiju from the Ultra-Ancient Civilization's time. In the present day, a single member awakened with Melba to attack the Ultra-Ancient Giants of Light within Tiga's Pyramid. They destroyed all but one of the three statues within the pyramid. After Melba's defeat at the hands of Ultraman Tiga, Golza fled and soon returned as Fire Golza.

In ancient times, an army of Fire Golzas attacked a city and fought against the Ultra-Ancient Giants of Light in an all out battle. Yuzare showed this to Daigo as a vision. Ultraman Tiga: The Final Odyssey

A surviving Golza awoke along with the sky-rending kaiju, Melba. Appearing first in Mongolia, Golza tunneled back underground, before GUTS could react. He later appeared in Japan, and causes destruction until he found Tiga's Pyramid.

Just as Melba arrives, both Kaiju manage to destroy two of the statues inside the Pyramid. Daigo Madoka tries attacking them, but to no avail, and is shot down. At the last minute, Daigo is transferred into the remaining statue. Fused with the statue, Ultraman Tiga was reborn, and fights both Golza and Melba with little effort. After transforming into Power Type, Tiga breaks Golza's spine, forcing the Kaiju to flee into the Earth, Tiga then changed into Sky Type, and finished off Melba. Inheritance of Light

Sometime later, Golza was discovered hiding underground beside a volcano, which was threatening to erupt. After absorbing so much heat from the lava, he had developed new powers and strength, as well as red markings that covered its body.

As GUTS went into the volcano to investigate (with the Self Defense Force outside waiting in case a Kaiju was attacking), Fire Golza was awoken and made his way to the surface, rampaging once again, without nothing that the SDF or GUTS could do to stop it. Daigo quickly turned into Ultraman Tiga, however Fire Golza's improved strength and absorption abilities proved to be too much for Tiga to handle. Even in Power Type their strength was matched, but Fire Golza's absorption abilities were still a problem.

As a result, Tiga then combined his physical attacks with his energy attacks to finally get an advantage over the kaiju, which worked and allowed Tiga to use the Zeperion Beam, and defeated Fire Golza. Realizing that the volcano was about to erupt again, Tiga carried Golza into the air and hurled him into the volcano, preventing the eruption, and killed Fire Golza in the process. Golza's Counterattack

Nine years after Fire Golza's rampage, the volcano he was destroyed in, erupted without warning. Once Super GUTS arrived, they quickly became preoccupied with the destruction brought about by the eruption. After launching a special laser drill underground, that was made to neutralize the epicenter, it was soon revealed that the eruption was caused by another Golza, whose cells have been enhanced with a power-up from the volcano.

Golza Ⅱ (ゴルザ二代目 Goruza Nidaime) emerged from the volcano and was again met by the weapons of the SDF and Super GUTS, but there was nothing they could do except annoying Golza Ⅱ. Shin Asuka turned into Ultraman Dyna but was barely able to hurt or even phase Golza Ⅱ's enhanced body, even with the Solgent Beam, leaving Golza Ⅱ to man-handle the Ultra with little effort. However, Dyna refused to give up, as he executed a powerful chop, that cut open Golza Ⅱ's skin. Dyna then fired a Solgent Beam (Spacium Beam type) directly into the wound, ending Golza Ⅱ's life and reign of terror. Captain Long-Legs

Golza was an ordinary Kaiju that lived on Planet Boris. After the ZAP SPACY members fired at Golza, the provoked Kaiju proceeded to attack them. The situation worsened when the commotion attracted the returning Kaiju Telesdon, whom had managed to escape Red King's assault. As the Kaiju closed in on the crew, Rei returned to aid ZAP SPACY, releasing Gomora and Litra to battle the kaiju, fortunately Gomora manages to destroy them both with his Super Oscillatory Wave.

In his second appearance, Fire Golza was the first Kaiju that belonged to the main antagonist of the series and Rei's sister, Kate.

He was first unleashed one night upon a group of eight Sadola, killing them all with ease. Once Kate had assumed the identity of a lost scientist, Fire Golza was released once again, this time to destroy the ZAP SPACY crew. Rei summoned Gomora, but Fire Golza proved to be superior in strength and dominated Gomora for the majority of the fight. With the assistance of the ZAP SPACY, Gomora managed to ambush Fire Golza, turning the battle to his favor and mortally wounding Fire Golza. Kate then confronted Rei, revealing her identity and her second kaiju, Gan-Q, to finish the match. Luckily, Gomora avoided Gan-Q's attack and Fire Golza took Gan-Q's attack by surprise and is quickly destroyed.

Golza reappeared in the movie Mega Monster Battle: Ultra Galaxy Legends The Movie, as Fire Golza and as one of Ultraman Belial's 100 Monster Army. When Ultraman Zero arrived at the Monster Graveyard, he with the remaining monsters are sent to fight the Ultra. He was the second of the last six Kaiju killed by Ultraman Zero.

Golza reappeared in Ultraman Ginga as a combatant of the Dark Spark War, where he fought his nemesis Ultraman Tiga. He was turned into a Spark Doll by Dark Lugiel. It is unknown whether he was kept in Lugiel's collection or fell down somewhere on Earth, but he should have returned to his original form after Lugiel's defeat.

Originally part of Alien Chibull Exceller's collection, Fire Golza's Spark Doll was given to Android One Zero where she "Monslived" into the monster to beat up Ultraman Ginga after Hiyori, who Monslived into Gomora, failed to defeat him, after witnessing Shepherdon taking a beating from Ginga's Strium Beam for her. She had Ginga's Color Timer flashing and was about to finish off Ginga with Gomora when suddenly, Hiyori betrayed her by firing Gomora's Super Oscillatory Wave at her. Fire Golza then knocked down Gomora before firing his Empowered Ultrasonic Ray at Ginga and then Shepherdon. Gomora then got back up and tried to slam his tail into him, but Fire Golza grabbed it and yanked it clean off, before the tail started constricting his neck until Fire Golza grabbed a hold of it, used it against Gomora, and then destroyed him with an Empowered Ultrasonic Ray. Hiyori then gave Sho his Victory Lancer back and he transformed into Ultraman Victory and he immediately "UITrans" his right arm into EX Red King Knuckle to combat Fire Golza. Victory then charges up the knuckle and destroys Fire Golza with a charged up punch. Android One Zero, however, recovered his Spark Doll and went back to Exceller's base with it.

Near the final, Alien Guts Vorst was sent to Monslive into Gan-Q and split into two to steal Shepherdon's energies. After Sho managed to distract Gan-Q, Shepherdon was released and knocked the monster while stomping on him rapidly but Vorst quickly turn the tables by swapping Gan-Q with Fire Golza and the Vorst clone/Gan-Q clone continued to absorb Shepherdon. The Live Base staff completed their objective, managing to fire a magnetic wave blast via the Base's parabolic antenna. Gan-Q was knocked down from the blast but it took Fire Golza's attention as he began to attack the base. Sho quickly recovered and transformed into Ultraman Victory to save them and Hikaru into Ginga to save his leader. Victory and Ginga found themselves occupied while trying to save Shepherdon until Victory used King Joe Custom's Pedanium Launcher and fired all of Gan-Q's clones. The real Gan-Q was destroyed by UPG Captain Yoshiaki Jinno whom used the Magnetic Wave laser that attached to the base's parabolic antenna and Victory's Victorium Shoot. Ginga morphed into Ginga Strium and finished Fire Golza with Zoffy's M87 Beam. Despite all three monster and alien reverted to Spark Doll, but they were retrieved by Exceller via teleportation. Nonetheless, Vorst's deed was done and Fire Golza's doll was among those needed for Alien Chibull Exceller to become Five King.

After Zaigorg's victory against Ultraman Exceed X, Gorg Fire Golza was created by Zaigorg alongside Gorg Antlar and five Tsurugi Demaagas. While the Demaaga army went rampaging in the worldwide, Gorg Fire Golza and Gorg Antlar accompanied their creator towards the Carlos Communications to destroy the stone that had imprisoned Zaigorg before. As it seemed that the front line of defense (Xio via Cyber Cards) proven ineffective, Ultraman appeared, and the silver hero was quick to face Gorg Fire Golza. The Golza appeared to have the upper hand after it attacked Ultraman with its Rolling Attack. But after some assault from Xio, Ultraman regained his strength and distracted Gorg Fire Golza by getting him to block an Ultra Slash and eventually killing him with the Spacium Beam. Ultraman X The Movie: Here He Comes! Our Ultraman

Golza reappeared in episode 2 of Ultraman Orb as a Kaiju Card, used by Jugglus Juggler with his Dark Ring as part of his plan of waking up Maga-Grand King.

Although not physically appearing, Golza is one of the hibernating monsters awakened when Genegarg crashed onto Earth. It was located in Mongolia.

Golza's remains were used by Shinya Kaburagi to create the Golza Medal. He later used the medal, alongside those of Melba and Super C.O.V., in order to transform into Tri-King, who later evolved into Five King after Kaburagi obtained the Reicubas and Gan-Q medals.

In Ultraman Ginga S, Fire Golza was revealed to be a part of Alien Chibull. Exceller's collection.

Golza was released several times by Bandai, most recently in the 2008 Ultra Monster Series.

Another figure of Golza was released in 1996 alongside the vinyl figure that is slightly taller and features a sound gimmick.

The reason why Fire Golza is so rare is because he was sold in a special pack with Ultraman Tiga Power Type to mope his episode. But there are extremely out of number from the pack and so unlike a few other like Leilons, Shugaron, and even Alien Baltan. They all have packs like Fire Golza is the least.

An Ultra-Act of Golza was released to the disappointment of many as a web shop exclusive and has since become a highly sought after figure.

There are both Golza and Fire Golza Spark Dolls in the Ultra Monster 500 set. They are 5 inches tall and accurate to the shows.

In 2016 to coincide with the release of Ultraman X The Movie the mold for the 6 inch fire Golza was re-released under a new paint job to represent Gorg Fire Golza. 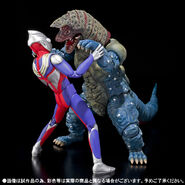 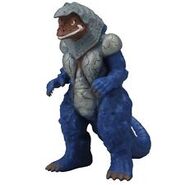 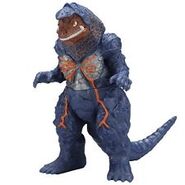 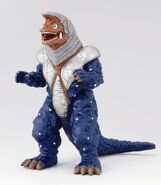 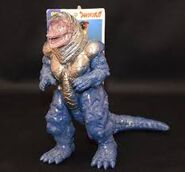 The original 1996 release of Golza 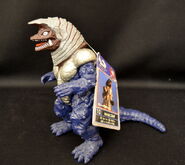 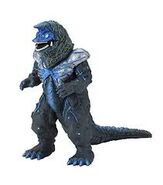