Goliath (ゴリアス Goriasu) is a space monster and the main antagonist of the Toho and Tsuburaya co-production, Daigoro vs Goliath.

Arriving on Earth in the form of a meteor, a weather controlling monster was revealed. Goliath controlled the weather, causing freak storms. This gained the attention of a brave monster, Daigoro. Coming to shore, the two monsters clashed, but the space monster's horn sent electricity through the infant, knocking him out.

Goliath then rested, sleeping in the water near Daigoro's island, but after a failed attempt to cover his massive horn, Goliath and Daigoro fought again, but the infant monster spewed flames from his mouth, destroying Goliath's horn. The blue behemoth, now powerless, fell unconscious and was sent back to space on a rocket. 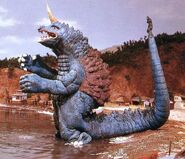 Add a photo to this gallery
Retrieved from "https://ultra.fandom.com/wiki/Goliath?oldid=468390"
Community content is available under CC-BY-SA unless otherwise noted.