Goldras was a time traveling monster that had been causing chaos throughout Earth's time. His presence was first felt by strange time warps that began appearing all over Japan, one dropping off a ship that had gone missing years ago in the middle of a city. Another warp appeared, dropping off a young woman who Yazumi of GUTS had a past connection with. Goldras continued to try to enter the present time by trying to create a large time storm for him to enter through. All the while, the warps Goldras had created began to suck objects and people from the present and sent them into other times while dropping off more past objects, threatening the spacetime continuum until finally Goldras emerged into the present by his time storm. GUTS came into action and opened fire on Goldras with everything in their arsenal, but nothing could pierce its armored hide.

Knowing he was under attack and wanting to continue his time warping chaos, Goldras attempted to escape back into the time storm, but Ultraman Tiga arrived just in time to try and hold the monster back. Goldras’s durable power was too much for Tiga to handle (even in Power Type) and combining his series of superpowers, he was able to deflect all of Tiga's attacks. Discovering Goldras’s horns were the source of its power, GUTS attempted to destroy them, but then suddenly coming to a realization. If Goldras was destroyed then there would be a huge risk of destroying everything that Goldras had taken from his time travel and alter spacetime altogether. Taking the risk, GUTS chose to fire and destroyed Goldras’s horns, leaving him powerless and allowing Tiga to unleash the Deracium Beam Torrent, killing the time monster instantly. With Goldras' destruction, everything he displaced in time was returned to its proper place.

After transforming Ultraman Mebius into a bronze statue, Alien Super Hipporit's unleashed King Silvergon and King Goldras to attack Japan together. The duo seemed indestructible, even when the air force launched an attack that was futile to their strength, and their rampage continued into the night. Alien Super Hipporit joined them in the rampage until Ultraman Tiga arrived to stop them. Tiga was able to handle both King Monsters until their master joined in the attack, and Tiga was overpowered by the trio. Dyna and Gaia soon joined the battle, again evened the odds for Tiga. Gaia battled King Goldras by himself, and eventually the monster was destroyed by the Photon Edge. But all the defeated monster's souls became Giga Khimaira.

King Goldras reappeared in the movie Mega Monster Battle: Ultra Galaxy Legends The Movie as one of Ultraman Belial's 100 Monster Army. He teamed up with King Silvergon, King Guesra, Arigera, Twin Tail, Gomess, Magular, Alien Baltan, Antlar, and Zetton to take on Ultraman. When Reimon and Gomora entered their Burst modes, Goldras along with the other survivng monsters stood back to watch Gomora fight the Ultras. King Goldras was one of Ultraseven's last kill as Ultraman Belial sends both him and King Silvergon to kill Ultraseven, but Ultraseven kills them both with the Eye Slugger before dying himself.

King Goldras was transformed into a Spark Doll as the result of the Dark Spark War. His Spark Doll can be seen in Dark Lugiel's collection. 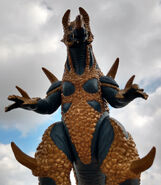 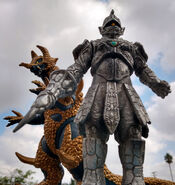 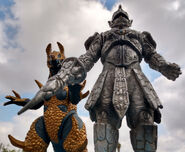 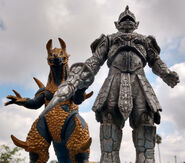 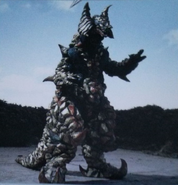 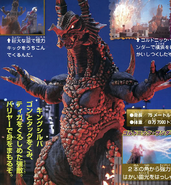