Golden Arm was proclaimed by Anti Go-Ne as a monster that surpassed all of Jumborg Ace's powers and would be strong enough to beat the mecha. Appearing in Osaka, he fough with Jumborg Ace, weakening him greatly. He retreated after PAT's Jet Condor, piloted by Ichiro Kishigi, attacked him.

After that, he reappeared in Osaka and fought with Jumborg once again, he was decapitated by Jumborg Ace's Heading Killer and crashed to the ground, exploding. However, he had succeeded in damaging Jumborg Ace. Anti Go-Ne then sent the real strong monster, Dead Fire. 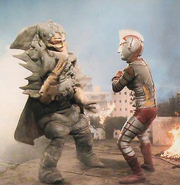 Add a photo to this gallery
Retrieved from "https://ultra.fandom.com/wiki/Golden_Arm?oldid=465117"
Community content is available under CC-BY-SA unless otherwise noted.