SSSS.DYNAZENON episode 9 "What Are These Overlapping Emotions?"

SSSS.DYNAZENON episode 12 "What Was I Entrusted With?"
Goldburn (ゴルドバーン Gorudobān)[1] is a Kaiju that debuted in SSSS.DYNAZENON. It is an ally Kaiju that was born from Chise Asukagawa's emotions. It is part of the combination of Kaiser Gridknight.

Goldburn started out as a pearl-like object that Chise Asukagawa happened to find and pick up just after Dynazenon defeated Shalbandes. What's Your Reason For Fighting? It started to grow by absorbing her feelings of being left out; be it at school or in the fight against the Kaiju. What Is This Pain? What's Our Reason for Coming Together? This culminated in it growing into a dragon-like Kaiju, which Chise named Goldburn after a poster of a band in her room. Initially she attempted to hide Goldburn's presence, but it soon grew too large to do so. Goldburn managed to pick up Yume Minami just as she was about to fall off the same floodgate where her sister Kano Minami died, and then combined with Gridknight and Dynazenon to form Kaiser Gridknight to defeat Gibzorg. What Are These Overlapping Emotions?

After the final battle against Gagula and the Kaiju Eugenicists, Knight and the 2nd take Goldburn and Dynarex with them as they leave for another Computer World. Chise says goodbye to Goldburn and says that Goldburn is the most amazing friend she has ever had. What Was I Entrusted With? 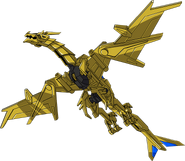