When Izenborg fought with Gottes, Zobina, Wara and Shizalas, a lone man ran to join the fight, sending from his golden cross the golden dinosaur, Golda! Instantly, the golden goliath began to clean house and make the numbers more even. After Zobina was killed by Izenborg, Gottes and his two saurian lackies retreated.

Days later, Izenborg and Golda fought Wara and Shizalas again, this time, destroying the two beast. Teaming up with the nameless man, the entire D-Force tunneled into the underground palace of Gottes. He was waiting though, as he set not only Kirasaurus after them, but unleased six Magmadon.

Kirasaurus and Golda instantly came to trade blows as Izenborg and Gottes traded slashes with swords. After Magmadon interupted, Golda killed the two saurians and rushed to help Izenborg, who was grounded by Gottes, who was ready to drop a boulder on the red and green cyber hero. Before the boulder could be dropped, Golda lept onto Izenborg and protected him, but sadly, lost his life.

Beam
Add a photo to this gallery 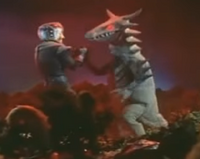 Add a photo to this gallery
Retrieved from "https://ultra.fandom.com/wiki/Golda?oldid=510928"
Community content is available under CC-BY-SA unless otherwise noted.