Gen I:
Gold Satan (ゴールドサタン Gōrudo Satan) is one of the many enemies from the TV series, Mirrorman.

Gold Satan's design motif is that of a Oscar statue.

One day at Lake Kitano a man named Yoshio Okayama was driving his boat when an Invader saucer beamed one of the aliens directly into his brain named Gold Satan. After Yoshio's head collided with a rock Gold Satan took control of his body to find and destroy Dr. Okuhara's Sol-gun which had the potential to hinder their plans considerably. Yoshio's mother and sister worried about the stoic and odd behavior as Gold Satan failed to find the Sol-gun. The saucer eventually showed up at the laboratory and allowed Gold Satan to turn into his monster form with Yoshio's body as the host. The Invader fended off the doctor and the SGM until Kyotaro stabbed him in the left ankle with a knife.

Gold Satan lured Kyotaro to the roof who in turn became Mirrorman using the reflection off of the knife. Gold Satan followed the hero into the second dimension where they exchanged punches. Mirrorman managed to beat him down, but Yoshio's mother yelled not to kill her son. Gold Satan used his mouth beams to stun Mirrorman in the face and overpower him briefly. The saucer back in the third dimension fired its beam only to miss the hero. After a second failed shot both Gold Satan and Mirrorman returned to the third dimension where the latter used the Mirror Halation to knock the Invader off the roof where he died. Obliterate! Operation: Human Body Invasion

The second Gold Satan, named Gold Satan II, was commanded by the Invaders to possess a women named "Shinjuku Rose". Three months after she died, Gold Satan II used her body to steal diamonds across the city of Ginza. The SGM proceeded to analyze one of the machines that was used in a robbery, eventually tracing it back to an inventor named Yoshikawa that was threatened by the Invaders in secret. Shortly after that Gold Satan II showed up as Shinjuku ROSE to try and kill Kyotaro with a narcotic gas, but failed and had to retreat. Kyotaro managed to take an earring which was used as a communicator receiver, the SGM was quick to analyze and decode it. Further analysis showed it was a portable generator for the devices used by Shinjuku Rose to steal diamonds via decomposing matter at the atomic level. Later, Kyotaro finds and chases down Shinjuku Rose, soon killing her by throwing a ring bomb back at her.

In desperation Kyotaro entered the device as Mirrorman to rescue Yoshikawa. Waiting for him was Gold Satan II as the two fought each other at the atomic level. The hero used the Slicer H on Gold Satan II only or the Invader to reform himself. After that Gold Satan II continuously teleported and fired beams at the hero, overwhelming him. As a final resort Mirrorman used his Silver Cross for the first time, killing Gold Satan and allowing him to rescue Yoshikawa from the atomic level in the machine. Here It is! The Silver Cross

Gold Satan appeared in episodes 11 and 18 of Mirror Fight. Stock footage of his fights in Mirrorman were reused in this series.

In the reimagining, Gold Satan's counterpart is called Reiki. 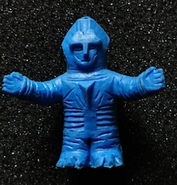