Golba was manipulated by Carmeara to attack the Martian colony.[1] Immediately after emerging in a cloud of dark smoke, Golba targeted the Ultra-ancient ruins that housed the stone statue of Ultraman Trigger and the Circle Arms, bombarding the dome protecting the site with volleys of fireballs. After both the dome's walls and its automatic defense systems failed to deter Golba, Mitsukuni Shizuma shot at it with the GUTS Sparklence, making Golba retreat momentarily. Nevertheless, Golba's efforts to breach the dome were successful, as it had managed to enter the interior of the dome itself, simultaneously allowing Carmeara a means of access.

Golba reappeared soon enough to further rummage through the now-exposed upside-down pyramid ruin, but Kengo Manaka transformed into Ultraman Trigger just as he was attacked by Carmeara, and fought against them both. Struggling at first, the Circle Arms returned to Trigger, allowing him to knock Golba over with the Zeperion Sword Finish. Trigger then attempted to fire the Zeperion Beam at Carmeara, only for her to use Golba as a meat shield to protect herself before leaving. Hit by the beam, Golba exploded and was destroyed. Connection of Light 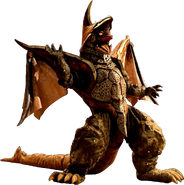