Gokinezula (ゴキネズラ Gokinezura) was a Kaiju that first appeared in episode 22 of Return of Ultraman.

Gokinezula was a reptilian Kaiju who first appeared living under a garbage dump, feeding on the trash, scaring a clown that was collecting trash. MAT was soon called in to investigate the monster sighting. As Go investigated, the ground started shaking due to the monster’s movements. Soon, methane gases coming off the decomposing rubbish lit on fire, sending towers of flame high into the sky. MAT was called in to put out the flames before they got out of control and quickly did so but soon there after, another quake occurred. Finally, Gokinezula erupted from underneath the trash and litter, scaring the workers. MAT was quickly called in to deal with the Kaiju and attacked him, firing a missile, only for him to catch it in his mouth and throw it away. More missiles were launched, only for the same to happen. He then used his webbing to wrap up one of their fighters, forcing them down while the others continued to attack on foot as he began rampaging through the area. As Go arrived to attack, his missiles were likewise blocked and Gokinezula cocooned his plane and then caught it, trying to crush it but Go became Ultraman Jack, who quickly got Gokinezula down and began trying to break his legs but the Kaiju escaped but as Jack prepared the Ultra Bracelet, an injury he'd sustained as Go prevented him from doing so. Jack had to dodge several web streams and managed to knock Gokinezula down, only for the Kaiju to recover and cocoon him with his webbing, weakening him to the point his timer began to blink, allowing Gokinezula to tackle him to the ground. Thankfully for Jack, another MAT fighter arrived to distract the monster, but failed to be anything more than an irritant. However, he managed to make Gokinezula become dizzy and fall over, accidentally cocooning himself! However, even then, Gokinezula managed to catch a missile in his mouth, but the recovered Jack fired the Spacium Beam into the missile, detonating it and beheading Gokinezula. Moments later, the monster's body fell to the ground dead.

Gokinezula was part of the Monster Army lead by Alien Empera, and was seen in a animated flashback fighting Father of Ultra along with Dangar and Zagoras in episode 25 of Ultraman Taro.

A powerful monster from the Baladon home world, Gokinezula was the third Kaiju unleashed on the island-disguised spaceship. It joined Arstron and Ghostron in battle, transforming the war into a colossal three-way battle royal. When Aboras and Banila also gave rise and began to duel, the Science Garrison began bombing all five kaiju, stopping the war for just a brief moment until Red King was set loose by the invaders. As the garrison watched on in awe, Ghostron was obliterated by the tyrant monster, but Gokinezula was its next challenger. The strange monster moved in to attack, but Red King effortlessly beat it down, ending its life in a quick couple strikes. 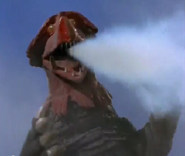 Gokinezula first appeared in episode 29 of the series, Redman where he fought Redman alone and ending up getting killed by exhaustion from a brutal beatdown. This left the hero vulnerable to a sneak attack by Dangar (who also got killed later on).

Gokinezula reappeared in episode 30 where he teleported in front of Redman while the hero was looking for him and then disappeared and reappeared behind him to confuse him but he countered that with a judo throw. After an even-sided brawl, Redman threw his Red Arrow at Gokinezula's chest, killing him in the process.

In episode 102, Gokinezula pushed Redman away a couple of times when he tried to grapple/throw him down but Redman grabbed him by the head and then pushed him down the hill where he rolled down. Even with Red Killer's assistance, Gokinezula was no match for the alien hero as he dealt with both him and Red Killer one at a time. When Redman summoned his Red Arrow to kill him, Gokinzeula pushed him away at first, but the alien hero overcame that difficulty the second time and killed him by stabbing him in the chest with his weapon, with Red Killer following suit.

Gokinezula reappeared in episode 105 where he teamed up with Gudon to take down Redman. They started out the fight by teleporting away from the alien hero's Red Arrow and then they snuck up on him from behind and gave him quite a sneak attack. Throughout the fight, no matter how many times Redman got back up, the two monsters would find a way to get back and overpower him. Eventually, after he defeated Gudon, the alien hero defeated Gokinezula by slashing him in the chest with his Red Knife, with sparks and smoke being shown on impact.

Figure of Gokinezula by Bullmark 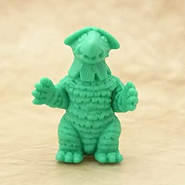 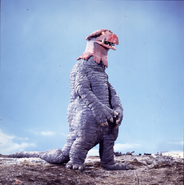