None
Gokigumon (ゴキグモン, Gokigumon) was a Kaiju that appeared in the TV series Ultraman Gaia.

Coming to Earth with nesting in mind, this massive insect-like beast landed in the heart of one of Japan's major cities and quickly transformed a large building into a nest for itself and its future babies. XIG was quick to come in, knocking the insect out with a special attack that was driven into its head. Before all those trapped inside could be rescued, Gokigumon woke up, and it was furious! The alien began to pump eggs into the building and a helpless XIG was forced to watch as it threatened to overrun humanity.

Ultraman Gaia was soon called into action, but the Ultra, before being able to attack, was quickly encased in a thick cocoon that kept the super being at bay. With Gaia out of the picture, XIG began to concentrate on destroying the nest at any means necessary, but the creature smashed one of the fire missiles out of the air and the second missed to strike a nearby building. As the bug kept its nest safe, Ultraman Gaia turned into Supreme Version and blew his way out of the cocoon before attacking Gokigumon head on. The insect was no match for the hero's great strength and after being thrown around, it was completely destroyed by Gaia's powerful attacks. With no protector left for the nest, XIG rescued the last human left inside and destroyed the nest completely. 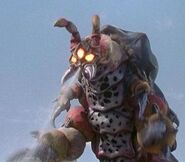