Not to be confused with the Mirrorman Kaiju with the same name, Gokibura.

Gokibura (ゴキブラー Gokiburā) is a cockroach Titanian that first appeared in episode 24 of Iron King. He is Titanian Operative No. #6, and like all the other Titanians, he wears a black hat, a red cloak and a white mask. In his giant form he is an insect monster.

Having constructed a new base within a condo in Tokyo, the Titanian invaders finally had set their sights on the largest city in Japan. Attracting a lot of attention for the condo they paid millions for, including both Goro and Gentaro, Titanian Operative #6 transformed in order to lure them away. As it began to suck everything up with its vacuum-like belly, Goro transformed into Iron King! The red hero challenged the evil space bug and beat it down, eventually causing it to revert back to its human-sized form and retreat after suffering two explosive flashes in a row.

Gentaro and Goro were in hot purist and ran back to the nefarious condo in order to rescue a group of children whom had been put under Titanian control. With Goro transformed into the hero outside the condo, the invaders’ plans were foiled again. Operative #6 transformed into Gokibura again and battled the red hero in the streets! Smashing through buildings, the two warriors were locked in combat but it seemed as if the cockroach-like behemoth had gotten the upper hand. Using its vacuum to draw in Iron King, it began to pummel the superhero. When all seemed lost, Gentaro interfered. He threw a grenade into its vacuum, severely wounding the villainous monster. Falling back in agony, Gokibura was finished off within a huge explosion by twin bolts of energy from Iron King. 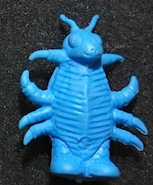 A Gokibura eraser.
Community content is available under CC-BY-SA unless otherwise noted.
Advertisement